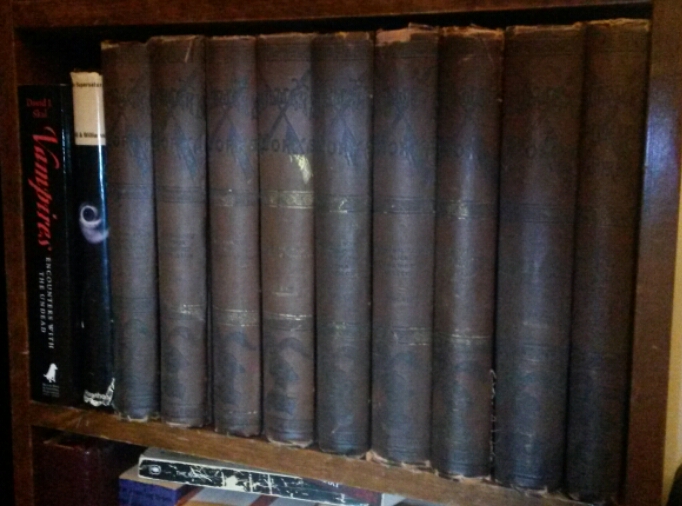 Last year, I ordered a set of books by Edward Bulwer-Lytton. It’s a 9 volume set of his most popular works. All the books are double-paged, and each volume contains a few different works.  I have a pretty big reading list, and it took a few months to get around to any of these battered old tomes, but almost as soon as I started reading, I knew this set had been a wise purchase. If you find a cheap copy of these books, buy them immediately. I spent about three times the cost of the books on the postage, but it was still worth it. (UPS are a dirty shower of thieving bastards!) 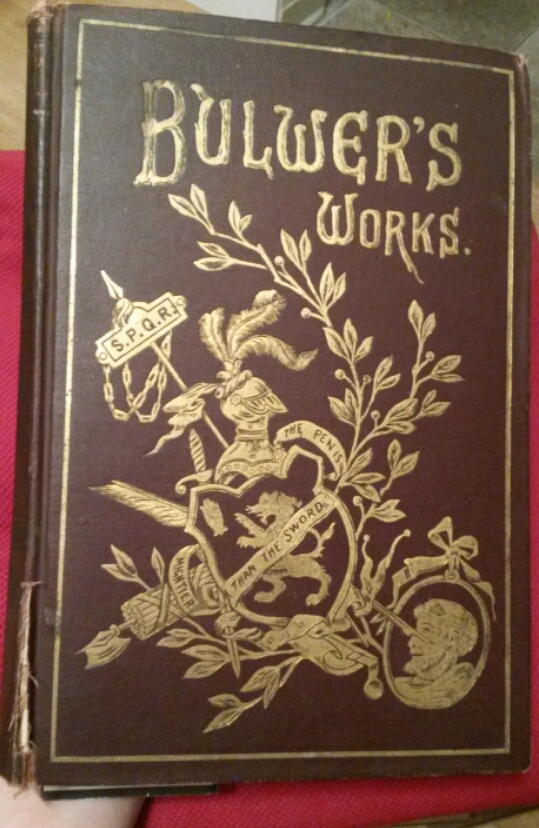 A pretty cool cover. N.b. the fasces and the obscenity.

These books were published in 1892, and it shows. The spines are all cracked and the binding is falling apart. I had to sit down at a desk and carefully turn each page so as not to cause further damage. Now one might think that this would have been detrimental to my enjoyment of these texts, but that couldn’t be further from the truth. I felt so cool, patiently leafing through the pages and inhaling their aged musk. One can only imagine my delight on finding that the text that I started reading was about a ciphered manuscript given to the author by a mysterious Rosicrucian whom he had met in an esoteric bookshop. All my dreams were coming true at once! 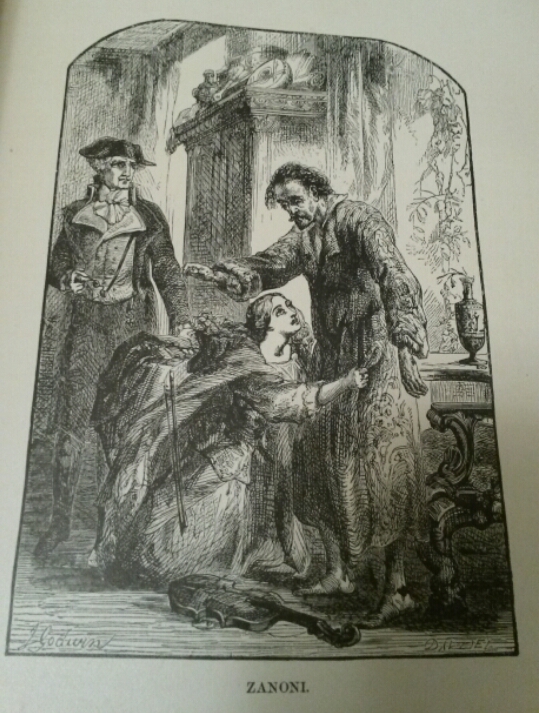 The frontispiece of Zanoni. It depicts Gaeto Pisani and his daughter, Viola. (I think.)

The manuscript tells the tale of Zanoni, an immortal sorcerer and member of an extremely exclusive secret society consisting of only two people. He tries his best to help out a pair of young lovers, but he fails miserably and ends up making their lives incredibly difficult. The youngfella thinks that Zanoni is really cool, and tries his best to be like him. Zanoni is fairly chuffed, and invites him to join his club. Unfortunately for everyone, Glyndon, the young man,  doesn’t get past the initiation ritual for the order, and ends up spending the rest of his days getting stalked by a particularly nasty entity called ‘the dweller of the threshold’.

Lytton was a hugely popular writer in the 19th century, and apparently the theosophists were big fans of his. Helena Blavatsky introduced a version of the dweller of the threshold into her teachings. She described it as an extension of one’s astral body that results from the remnants of past lives. Other occultists have appropriated the dweller in other equally silly ways. Van Morrison, everyone’s favourite adept of easy-listening, had an interest in the occult at some stage, and he used one of these bastardized versions of the dweller for the topic of one of his songs. Before I go any further, I want to declare my extreme and utter hatred for Van Morrison. I remember being a kid and having the tape of Van the man’s greatest hits playing in the car every fucking time my parents took me on a drive. I didn’t know what it was called, but I referred to it as ‘sweaty music’ because that’s how it made me feel. I actually listened to his song a few times before I wrote this review, and it made me want to vomit and shit diarrhea at the same time. Anyways, the lyrics to Morrison’s song are about some kind of benevolent source of spiritual inspiration. Bollocks to that. In Lyttons work, the dweller is a seriously nasty piece of work:

Its form was veiled as the face, but the outline was that of a female; yet it moved not as move even the ghosts that simulate the living. It seemed rather to crawl as some vast misshapen reptile; and pausing, at length it cowered beside the table which held the mystic volume, and again fixed its eyes through the filmy veil on the rash invoker. All fancies, the most grotesque, of monk or painter in the early North, would have failed to give to the visage of imp or fiend that aspect of deadly malignity which spoke to the shuddering nature in those eyes alone. All else so dark,—shrouded, veiled and larva-like. But that burning glare so intense, so livid, yet so living, had in it something that was almost HUMAN in its passion of hate and mockery,—something that served to show that the shadowy Horror was not all a spirit, but partook of matter enough, at least, to make it more deadly and fearful an enemy to material forms. As, clinging with the grasp of agony to the wall,—his hair erect, his eyeballs starting, he still gazed back upon that appalling gaze,—the Image spoke to him: his soul rather than his ear comprehended the words it said.

“Thou hast entered the immeasurable region. I am the Dweller of the Threshold. What wouldst thou with me?”

I won’t say much more about the plot, as I don’t want to ruin the story on you. Being honest though, this is not a great book. There are some fairly big flaws here; it seems a bit like the author was making up the plot as he went along, and the detailed parts on the French revolution are neither interesting nor particularly relevant. Some editions use the subtitle; ‘A Rosicrucian tale’, and this is fairly apt: there’s probably a lot of symbolic and esoteric meaning between the lines that will only become apparent to patient students of hermeneutics, but I’m not really concerned with that shit. This is an old book about wizards, spirits, demons, and babes with heaving bosoms, and I thought it was deadly.