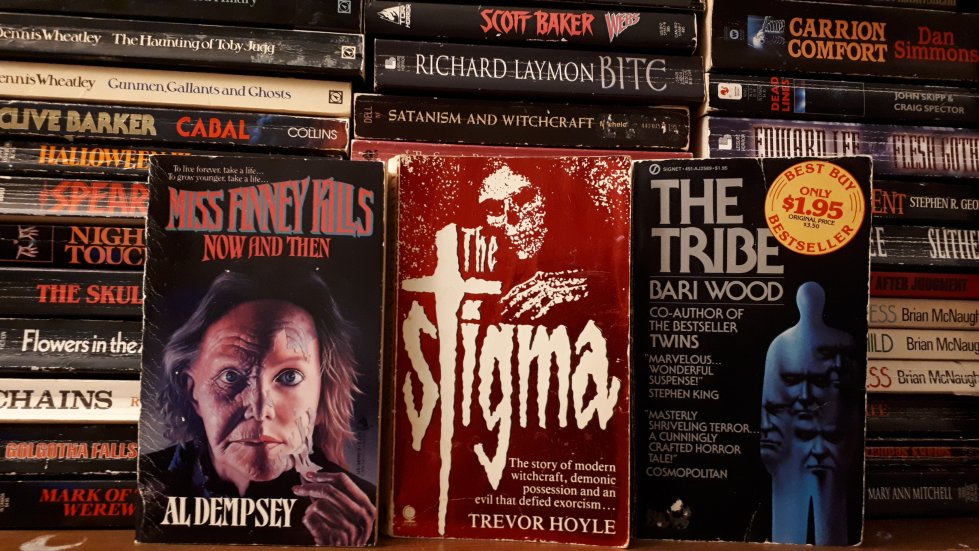 I’ve read quite a few paperback horror novels over the summer. Most of them are throwaway reads that don’t justify a post of their own, so I’ve been grouping them by series, authors and publishers. (Expect posts on William Johnstone’s horror novels, J.N. Williams’s Martin Ruben series, Richard Jaccoma’s Werewolf series, and random Zebra and Tor books showing up here in the next few months.) The books in this post have nothing to do with each other aside from the fact that they were all featured in Grady Hendrix’s and Will Errickson’s Paperbacks From Hell and also reviewed by those guys online. I don’t feel a need to go into much detail with these books as Grady and Will have done so already.

The Stigma – Trevor Hoyle
Sphere Books- 1980
This book starts off very serious, and there’s a bunch of references to real witch trials and the Brontë family that got me excited. I’ve never reviewed Jane Eyre or Wuthering Heights on this blog, but they’re two of my favourite books, and the Brontë references left me moist. There were also some fairly scary moments, and by the halfway mark I was wondering if it was really fair for a book like this to have been listed alongside the work of J.N. Williamson in the pages of Paperbacks From Hell. Then I got to the bit where a naughty dog tries to rape someone and had to reevaluate my stance. Things get grosser and sillier as the book comes to a close, and the ending alone warrants its inclusion in PFH. This is ultimately quite a silly book, but I enjoyed it.

I decided to buy The Stigma after reading about it in PFH, but like so many of the texts featured therein, cheap copies of The Stigma became scarce for a while. I paid more than I should have a year and a half ago, but it seems that there’s loads of affordable copies online again now. Grady Hendrix also wrote a more elaborate review of this book for Tor.com 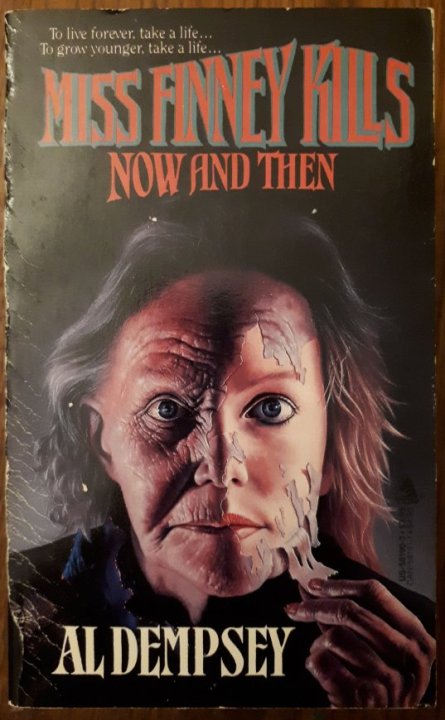 Miss Finney Kills Now and Then – Al Dempsey
Tor 1989 (First published 1982)
This is the story of an old woman who can grow younger by murdering people. I found it very enjoyable. The characters are more interesting than I expected, and the plot, while obviously ludicrous, is pretty entertaining. When I was buying this at a thriftstore, there were two copies. One had a slightly classier looking cover featuring a bloody dagger, but I obviously went for the hideous hag one. I discovered Grady Hendrix’s review of this book right after finishing it and then realised that it’s actually featured on the front cover of Paperbacks from Hell. Will Errickson also reviewed Miss Finney. He hated it.

The Tribe – Bari Wood
Signet – 1981
I saw a copy of this at a used bookstore a few weeks back and picked it up. I couldn’t remember reading about it, but I knew it was recently republished under Valancourt’s Paperback from Hell reissue series, so I assumed it would be pretty good.

This is definitely a cut above the other two books in this post. It’s actually a well written novel with an exciting plot and complex characters. It deals with complicated issues in a way that doesn’t get pedantic or preachy. The Tribe tells a story that makes you think. Will Errickson and Grady Hendrix both commented on the effectiveness of the prologue, and I can confirm that it’s pretty great. I can’t imagine anyone reading the first 20 pages of this book without wanting to read the rest.

Oh yeah, it’s about a murderous Golem in New York, but don’t let that put you off. It’s actually fucking great.

After having read The Tribe and enjoying it so much, I definitely aim to read the other Paperbacks From Hell that Valancourt are reissuing.

Well, there you go. These books were amoung the better horror novels I read over the summer. Thanks to Grady and Will for the recommendations.

2 thoughts on “Summertime Reading: A few more Paperbacks from Hell – Miss Finney Kills Now and Then, The Stigma and The Tribe”