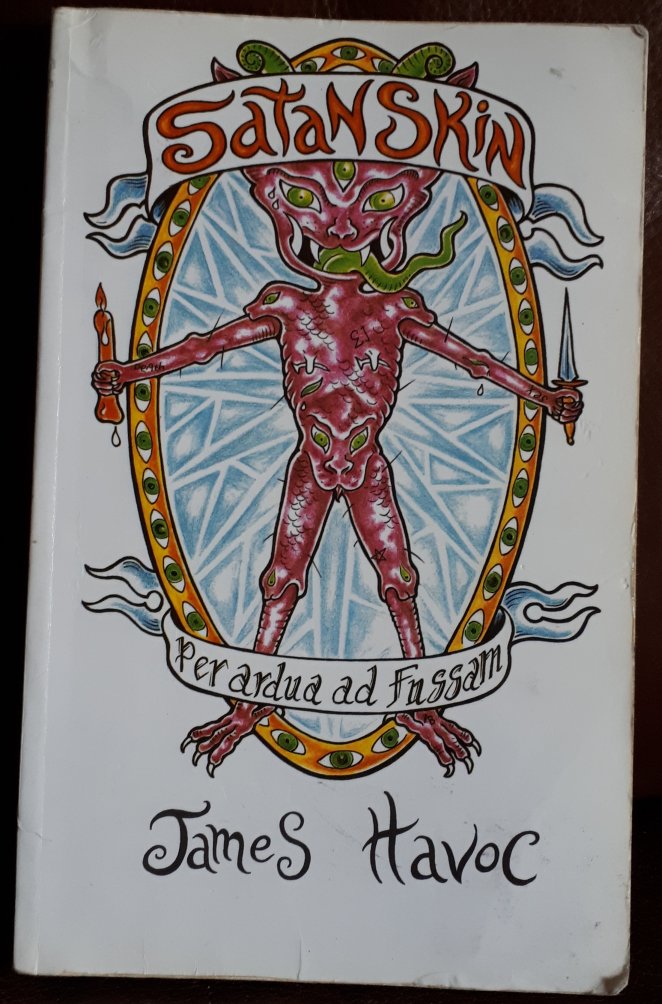 Unfortunately, Satanskin is puerile, boring, and embarrassingly transparent. The author has tried his utmost to seem mystical, dark and shocking, but he comes across as a bullied teenager using a thesaurus to channel his rage. Seriously, this is a cringefest.

Staring into the purple void, Harold ran the razor around his dilated anus, streams of blood mingling with trickles of purple feces as fecund as the panic of isolation – mother’s milk, feeding the vampiric clones of contused goblins. With a transparent swastika hovering in the placid skies of rage, Harold could feel the sickening pulse of his self induced hysterectemic stump through his lacerated colon.

I tried to write the above paragraph as a parody of Havoc, but it actually came out very close to the real thing. This book is 100 pages of this kind of garbage.

Satanskin also contains a version of Havoc’s previous book, Raism: The Songs of Gilles De Rais, as an appendix. This is a revised version of the original text of Raism, but it is not the 4 part complete version. There was also a graphic novel series based on Raism, and Havoc wrote a 4th part for that, but I don’t think the comic series was ever completed. I assume the final version of Raism appears in the collected works of Havoc, but I have no intentions of ever reading that. I think these are supposed to be songs or dreams or something from the perspective of Gilles De Rais, but Raism, much like Satanskin, is unreadable garbage. Havoc also had a musical project called Church of Raism. It sucked real bad too.

I’m being quite harsh on James, but from what I’ve read about him online, he’s not the greatest guy in the world. That being said, I wouldn’t have enjoyed this book if it had been written by Nelson Mandela. It wasn’t intelligent, it wasn’t mysterious, it wasn’t disturbing, and it wasn’t remotely enjoyable. It was terrible, a nightmare, a waste of time, money and effort.

One thought on “Satanskin – James Havoc”