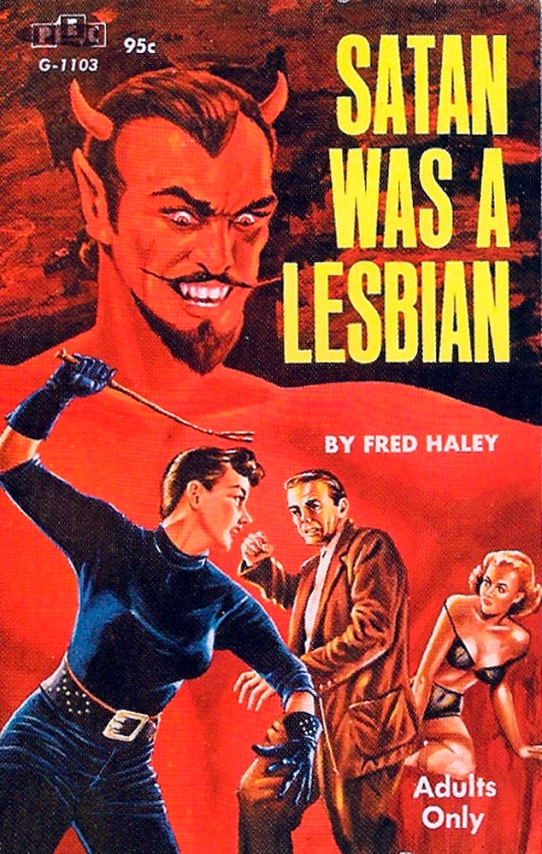 I’m sure you already saw it, but take another look at that incredible cover there. Bask in its glory. It’s a thing of absolute beauty. This cover was also used on Jan Hudson’s Satan’s Daughter. That book was originally published in 1961, 5 years prior to Satan was a Lesbian, but there were at least two printings of that novel, and I don’t know if this cover originally appeared there or on Haley’s book.

Don’t worry about spoilers. The story is lame. Here it is:

A little girl named Charlene comes across a man drowning some kittens. She becomes very upset. Later in life, Charlene leaves home and gets a job as a server at a drive-in movie theatre. She hooks up with a girl that she meets at work. Through this experience, Charlene discovers that she likes being the dominant lover. The girl that she hooks up with tells her lesbian friends.

One of these friends, a woman named Karen, comes to Charlene’s job and arranges a tryst. Charlene makes her kiss her foot before they shag. Soon after this, Karen, with help from her butch friend Billie, kidnap and rape Charlene. Charlene beats them up the next morning and leaves.

Charlene hooks up with yet another girl, Cynthia. Cynthia gets off on being afraid, so Charlene drives her around at dangerously high speeds before they shag. They see each other a few times more.

On one of these occasions, the girls that raped Charlene show up and things turn nasty. Karen tries to rape Charlene’s new girlfriend, but Charlene manages to beat her up again.

After this, Charlene runs away without telling Cynthia where she’s going. She moves to Hollywood and murders a man who raped one of her new friends. She also meets another girl at work and ends up having some rather kinky sex with her.

Meanwhile, Cynthia is raped by the lesbians who were after Charlene. She enters into a weird 3-way relationship with them, but ends up stabbing them both to death and running away after her dad peeks through a window and sees her tickling one of them with a large feather.

In the last chapter of the book, Cynthia meets Charlene in Hollywood and they drive their car into a wall and die.

There’s quite a lot of titty squeezing, but anything below the belt is described only in very vague suggestions and metaphors. The author shies away from mentioning any kind of penetration, but s/he is comfortable describing a woman being walked around on a leash and subjected to other acts of degradation.

Apart from a few “you’re a devil” comments, there’s nothing about Satan in this book.

Satan was a Lesbian has one of the greatest covers I have ever seen, but it’s actually a very shit book. Copies of the original printing are ridiculously expensive too. There’s a print-on-demand version that you can find for much cheaper, but that’s just a printed copy of the the pdf version that you’ll be able to find for free with a quick google search.