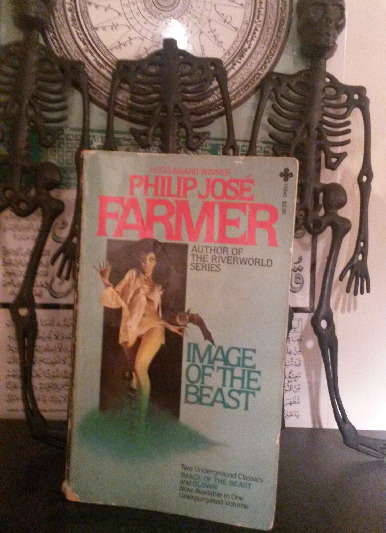 Snuff films, sleazy detectives, vampires, ghosts, werewolves, intergalactic rivalries and Gilles de Rais; what more could you ask for? How about a dash of ultra-perverted hardcore pornography?

That will suit me nicely.

This novel is trash, you never get the impression that it’s anything but trash, but reading it will convince you that trash can be absolutely glorious. I loved this book. It is exactly the kind of thing that I enjoy reading. It’s based on a perverse sex murder and the whole story has a really seedy atmosphere. It’s full of bizarre characters, weird sex and supernatural violence. There was no chance of this book giving me anything but extreme enjoyment. There’s never any clear explanation given of the antagonists’ motivation but that doesn’t matter. Evil is doing evil because it’s evil. Fuck an explanation.

My version of Image of the Beast also includes the novel’s sequel; Blown. Blown is both more science-fictiony, and less grim than Image. It’s still very nasty and odd though, and I think it probably contains more weird sex acts too. It offers an explanation of some of the events in Image, but personally I didn’t find this explanation to be completely satisfactory. I don’t want to say that I was disappointed by any element of this book being too far-fetched, indeed it is in the sheer ridiculousness of these tales that their glory lies, but I felt that the intergalactic explanation in Blown seemed a little absurd in relation to the events it was explaining.

Let me use an analogy to describe this book. It’s like a pizza topped with all of my favourite toppings. Each ingredient is delicious in itself and complements most of the other ingredients on the pizza; but unavoidably, some of the combinations taste kinda weird.

Another minor critique is that this book contains bizarre amounts of geographical detail. It must mention every street name in Southern California.

It has some minor flaws, but ultimately, this is a delicious pizza of a book that I would strongly recommend. 8/10.