The Bargain – Jon Ruddy
Knightsbridge – 1990
Although it’s disguised as a novel, Jon Ruddy’s The Bargain is likely the most historically accurate account of the sinister proceedings that brought an end to the second world war that has ever been published. This is the true story of how Count Dracula used an army of vampire whores to bring and end to Third Reich.

It took me approximately one minute to order a copy of this book after seeing an image of its cover online. I don’t regret my purchase. The cover is phenomenal, and the book itself is actually fairly enjoyable. There’s lots of sex, swearing and gore, and it really wouldn’t be fair to expect anything more from a book with that cover. To use Ann Radcliffe‘s distinction, this book is very much a horror novel rather than a tale of terror, and sometimes some straight forward horror is just what I need. 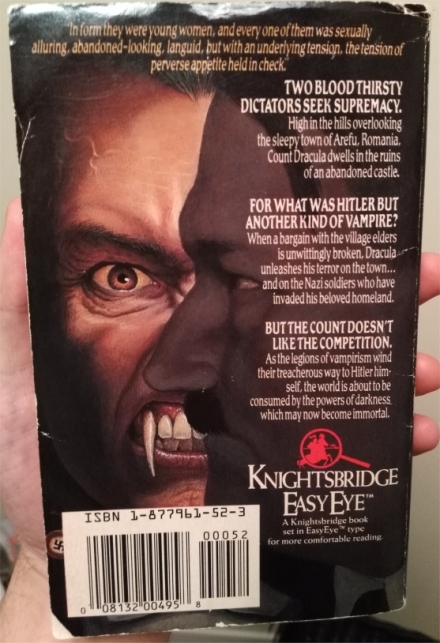 Dracula never died, but he got really annoyed when Hitler invaded Romania, so he  made a bunch of vampire prostitutes and got them to fuck/infect/kill German soldiers. This is very much a Dracula versus Hitler story, and while that is obviously super cool, I was hoping that it would be more of a Dracula and Hitler (up a tree) story. I feel like that these boys would probably like each other, and instead of reading about their rivalry, I’d prefer to see them going out for a beer together. Holy shit, imagine how entertaining it would be if Dracula and Hitler had a weekly podcast where they just shared their stories and opinions. I mean, it would be evil as fuck, but I would definitely listen to it.

I had a fairly similar complaint when I read Dennis Wheatley’s They Used Dark Forces.  That book is about Hitler and black magic, but the dark forces in question are largely being used against Hitler. If I’m reading a novel about Hitler, I want him to be the main bad guy. I want to read allegations of him being a vampire or a black magician. I want a book that explains how Adolf Hitler would drink the blood of a virgin, then sprout wings and fly into the night sky to pay homage to Lucifer, his lord and master. If anyone knows if such a book exists, please let me know!

This book was still pretty sweet though. Read it.