The Hallowed Genie – Basil E. Crouch
Finbarr International – Publishing date unknown
It seems that the standard of books being reviewed on here recently has declined in a pretty serious way. It’s sad to think of the few people who are dumb enough to buy this kind of rubbish, but it’s more depressing still to think that more than a couple actually put this crap out.

First off, this author’s name is Basil Crouch. That sounds far too similar to Basil Brush for me to be able to read this book without imagining the text being narrated by a snooty English fox. This was doubtlessly the reason for the author’s adoption of the slightly more mysterious pen name ‘Basil La Croix’ for some of his other works.

Anyways, ol’ Basil was either a moron or a swindler. The spells/rituals in here are so stupid that I hope he only put them to paper to relieve idiot Occultists of their expendable income. It’s either that or he was a mentally deficient teenager.

Build a little monster out of clay and then put him in a circle of candles. Tell him 10 times that you need some money, read him some Bible verses, and in no time at all, you’ll be a millionaire. The key to this ritual is the word ‘need’. Telling a Genie that you want something is useless; you have to tell them that you need it.

Basil blames wants for a great deal of the world’s ills. He claims to have medical evidence to show that women who experience an unsatiated desire during pregnancy are likely to give birth to a mutant.

The above “medical curiosity” was actually a woman named Rosa Plemons. She suffered from muscular atrophy. She was supposedly kidnapped when she was 19 and put in a freak show. Her tale is more tragic than curious, and I don’t know why she was included in here. I don’t know anything about the bendy lad at the bottom.

Basil makes his ridiculous claim about wants and needs halfway through the book, but it’s only on the last page that he includes images of the resulting ‘medical curiosities’. This is just one of several examples of how disorganized this text is. Certain paragraphs explain that the next section of the book will discuss a certain issue, but that issue won’t actually be mentioned until pages later. Also, it seems as if Basil decided to pad out his text with a few lengthy Biblical Psalms in order to reach his desired page count. 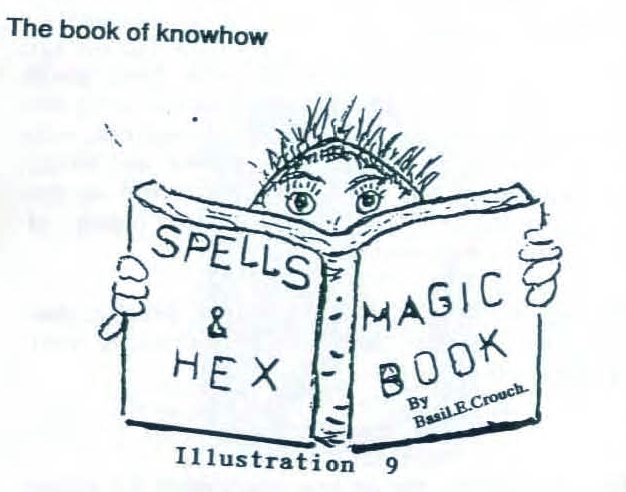 Me on the bus to work in the morning.

When I started this blog, I read just about any occult-related material I could get my hands on. I quickly realised that most of it is airy-fairy, white-people-with-dreadlocks nonsense. I then focused my attention on black magic and Satanism. I haven’t read or reviewed much that doesn’t at least touch on the darker side of Occultism, so I must have been expecting something of that ilk when I decided to read this. Unfortunately, this book has no badness in it. There’s nothing interesting about it other than the author’s sheer incompetence. This is pathetic.

Note: Since writing this review, I came across a thread about Basil Crouch online. Apparently he was a well respected magician, and there’s curious tales about people destroying his books because they were too “tempting and Dark”. I have managed to track down pdf copies of a few more of his texts, and even though the Hallowed Genie is absolutely awful, I have grown curious and will doubtlessly read and review his other works at some stage. Stay tuned.