How do you know when a Frenchman’s been in your back yard?
Well, your garbage cans are empty and your dog is pregnant.
– from The Body (1982) by Stephen King

There’s no aliens or demons this week, just 3 books by some dirty Frenchmen. These texts may be a little different to the stuff I usually review, but Bataille’s book’s weirdness and elements of body horror are enough to warrant its inclusion here. That book goes hand in hand with the book by Aragon, and the title of Louÿs’ book makes it at least sound like my usual fare. There’s countless other dirty French books that I could have chosen for this post, but these 3 were published within a couple of years of each other, and all three are critically acclaimed. I also read all of them recently, so it works out.

The story here is fairly easy to follow, but the events described are so strange that it’s hard to imagine them taking place outside of a dream. I’ve seen this book described as horror before, and I think that’s a fair assessment. It’s like reading a repulsive sexual nightmare. I first read Story of the Eye years ago, but I reread it recently after reading George Bataille’s book on Gilles de Rais. I’m considering reading more of his stuff, but I’m afraid that some of it will be too philosophical for me.

This book had been on my to-read list for several years, but when I actually read it, Irene’s Cunt was a little too deep for me. It’s quite an arty book, and either there’s not much of a story or the story is horribly obfuscated by changing narrative perspective. When these narrative shifts occurred, I wasn’t sure if I was dealing with a new narrator or an older version of the previous narrator.

At one point in the text, the narrator rails against bourgeois fascination with plot, and one would be hard pushed to give a concise plot summary of this peculiar work. Both George Bataille and Albert Camus sang its praises, but most of it went over my head.

There’s some fairly graphic depictions of sex, but again, this book isn’t very sexy. You’d have a hard time wanking over it anyways. It was published in the same year as Story of the Eye, and both books originally contained illustrations from the same artist, André Masson, so if you read one, you should probably check out the other. Stylistically, Irene’s Cunt is more obtuse than Story of the Eye, and I found it far less interesting. Truth be told, it’s not even that cunty. 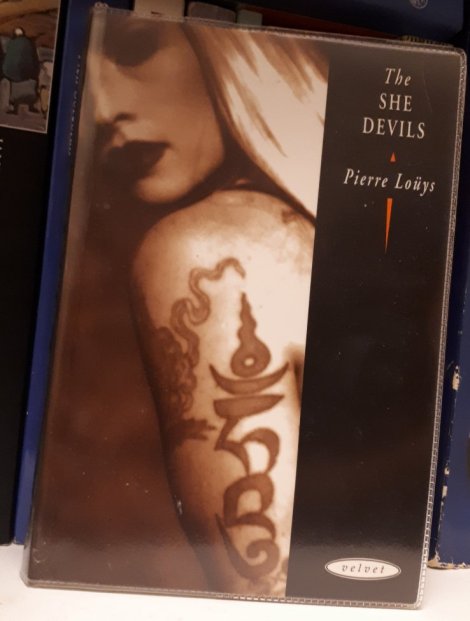 I bought this book because of its title. I knew it was going to be dirty, but I was hoping that the plot would be somehow related to the Devil. It’s not. This is just a book of filthy pornography.

The She Devils was published 2 years before the other books in this post, and its author had died a year prior, so it might have been written quite a bit earlier. While Bataille and Aragon were linked with the surrealist movement, Pierre Louÿs was more of a symbolist. Honestly, even after reading the wikipedia entry, I’m not really sure what symbolism is, but judging by this text, it’s a little bit less absurd than absurdism.

The She Devils has a very simple plot. At all moments during the narrative, it’s pretty clear what’s going on. A woman and her three daughters move into the apartment beside a young man, and this cheeky chappy sodomises his new neighbours whenever they come to visit him. That’s pretty much it. Seriously, this book contains a lot of bumming.