Happy Halloween. To celebrate my favourite holiday, I’m reviewing two Halloween horror novels that have pumpkins on their covers. 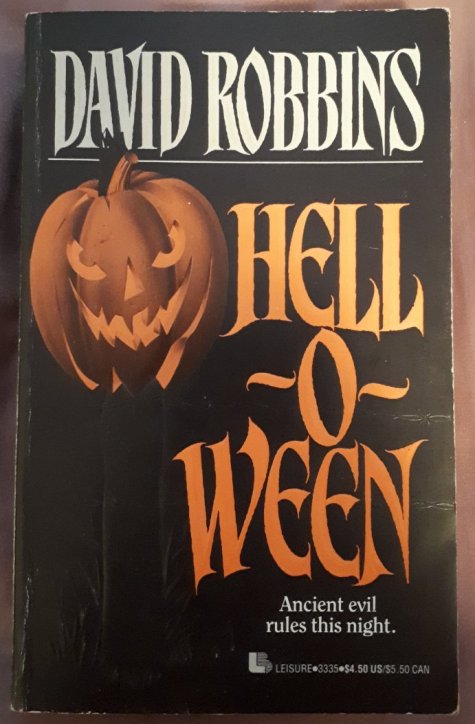 Hell-O-Ween is a remarkably awful book. It starts off with the line; “Yo dweeb, are you ready to go monster hunting?”, and what follows is pretty much what you’d expect. This is an overwritten Goosebumps book with a little violence and a few (gross) mentions of sex thrown in. The following sentence appears n page 23: “She’d neck heavy and let a guy play finger tag with her box, but she refused to go all the way.” This isn’t a line of dialogue either; it’s the narrator’s voice. Finger tag with her box? Jesus.

Hell-O-ween is the story of a nerd, two sluts, 3 jocks (2 bad and 1 good), a geeky girl and a beautiful virgin. These painfully stock characters decide to explore a system of caves on Halloween night. There is a huge picture of an angry demon right at the entrance to the cave, and the astute reader will figure out exactly how the story is going to end after about 10 pages.

Very little happens in here that you wouldn’t expect. Perhaps the most interesting part was a lengthy passage in which one of the jock characters admits to his friend that he started selling cocaine in defiance of his liberal father. I’m sure the author was making a point here, but I can’t figure out what it was. Was it that liberals are irresponsible and can’t raise kids, or was it that non-liberals are piece-of-shit drug dealers? I sincerely don’t know.

This was a gruelling read that I regretted starting almost immediately. Do yourself a favour and give this one a miss.

The Manse won a Stoker award for best 1st novel in 1987. Kathe Koja’s excellent The Cipher won this same award a few years later, so I was expecting a fairly high standard from this book.

I was disappointed, terribly disappointed. This is shockingly dull garbage. It’s the painfully boring story of a haunted house that becomes extra haunted on Halloween night. Actually, Will Errickson reviewed The Manse years ago, and said all of the things I feel like saying about this book. Read his review if you’re still interested. I don’t need to say anything more. Cantrell wrote a sequel, but I’m not going to waste my time on it. The Manse was a shitty, shitty pile of trash. It was poo in a baby’s diaper. Stay away!

For the last year, I have published (at least) one post per week. I have read some great books in the process, but I have also forced myself to read some utter crap to maintain the steady stream of reviews. After some consideration, I have decided that continuing at this pace isn’t really beneficial to me or to this blog. Look at some of the shit I’ve reviewed in the last year.

Nobody cares about this nonsense, especially me. With this in mind, I want to let you know that I am going to cut back on posts for the next while. I’m going to be focusing on quality rather than quantity for a bit. This probably means 2 posts a month rather than the 5 you’ve been getting for the last year, but at least the newer posts will more than just “This book is pooey farty bumbum.” I want this blog to be something that I enjoy doing rather than something I feel obliged to do.

Have a safe and happy Halloween. Check out my previous Halloween posts while you’re here.

4 thoughts on “Hell-O-Ween and The Manse”