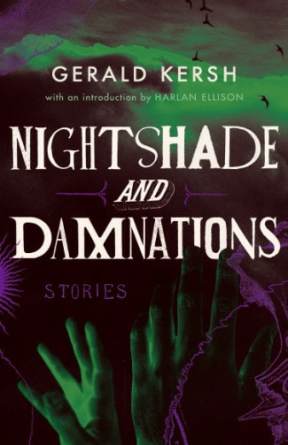 When I added Michael Blumlein’s The Brains of Rats to my to-read list on goodreads, this book by Gerald Kersh popped up in my recommendations. It’s a highly rated collection of short stories titled Nightshade and Damnations, so I threw it on the list too.

There’s quite a few similarities to Poe here. The range and focus of these stories is similar, the general outlook is as twisted, and these stories are superbly written. Kersh acknowledges Poe’s influence by actually framing one of the tales as a submission from Edgar to a local newspaper.

Aside from Poe, the closest thing to which I can think of comparing these stories is The X-Files. There’s communities of freaks, bendy men, radioactive time travellers and immortals. Of course, these stories were published long before The X-Files was produced. While reading this, I started to wonder if Alvin Kersh, the unpleasant boss character in The X-Files, didn’t get his name from the author. (This is apparently not the case.) One can easily imagine Mulder and Scully appearing on the scene at the end of most of these tales in an attempt to figure out what has been happening.

In truth, this collection wasn’t quite what I expected. These stories are not straightforward horror, but they are weird, and some are quite creepy. I’m very, very glad to have read this book, as I enjoyed it immensely. I strongly recommend it to anyone with any interest in strange, well written short stories. (If you don’t consider yourself part of that group, fuck off.)

This collection caught me off guard. Most of the stories in here are short vignettes of speculative fiction. I wasn’t hugely impressed until I got to the 12th story, ‘The Cat Burglar’. It was at the ending of this tale that I understood the genius of Frederic Brown. While other authors throw out their ideas haphazardly, Brown takes his readers where he needs them to be before planting a one sentence bullet right into their skull. The final sentence in ‘The Cat Burglar’ is hilarious, but the plot twists in some of the later tales feel more like punches than punchlines. Frederic Brown was an excellent writer.

While many of these tales in here are lighthearted (or downright silly), some of the longer tales towards the end get quite dark. These were the ones I enjoyed the most, but I did like the rest of the book too. Stephen King claimed that this book was “particularly important” to the horror genre, and this would be true if all it contained were ‘The Joke’ and the ‘Little Lamb’. Both tales are similar in their set-up, but I enjoyed both immensely.

These two books weren’t quite what I was expecting. Most of the short story collections I’ve read recently have been ultra-violent books of trashy horror. Gerald Kersh and Frederic Brown steer clear of that approach; their writing is far more interesting and enjoyable.  I wasn’t expecting the caliber of the writing to be so high, but that was just my naivety. Both books were recently reissued by Valancourt Books, and the general rule with Valancourt is that the books they put out are awesome. You should definitely read both of these collections.