Since the start of the lockdown, I have been ripping through thrashy horror novels. Here are three by Harry Adam Knight. Harry Adam Knight was a pseudonym used by a pair of authors, John Brosnan and Leroy Kettle. These three books were written within 3 years of each other, and each one of them is about a genetic experiment gone wrong. I’ve been really into this kind of stuff recently. Maybe I’m subconsciously trying to teach myself how to cope in situations where an inhuman force is decimating a completely unprepared civilization. I don’t know. 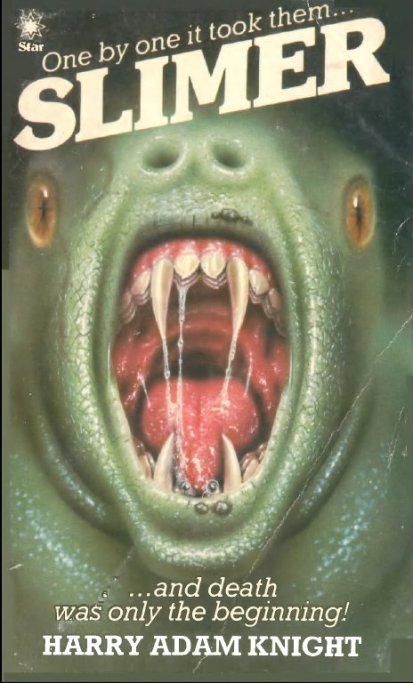 I was really surprised at how much I enjoyed this novel. The premise is ludicrous and the characters are dumb, but the setting is so effective that it makes this a really enjoyable read. The idea of an abandoned oil rig, hundreds of miles from civilization is perfect for a horror novel. There’s a real sense of mystery that creeps out of the emptiness. (I was reading over this paragraph before publishing this post, and I remembered an episode of the X-Files that was set on an oil-rig. I’m just reading over the plot synopsis of that episode now and I’m surprised by the similarities with this book. It was Vienen, the 18th episode of season 8 (2001), if anyone is interested in writing a compare and contrast essay.)

Once things get going in Slimer, they head in the direction you’d expect, but by that stage I was enjoying the atmosphere and the drama between the characters. I read this book over two days, and I spent the entire first half of the second of those days looking forward to sitting down and finishing it. There’s no denying that this is trashy horror, but I had a good time with it. 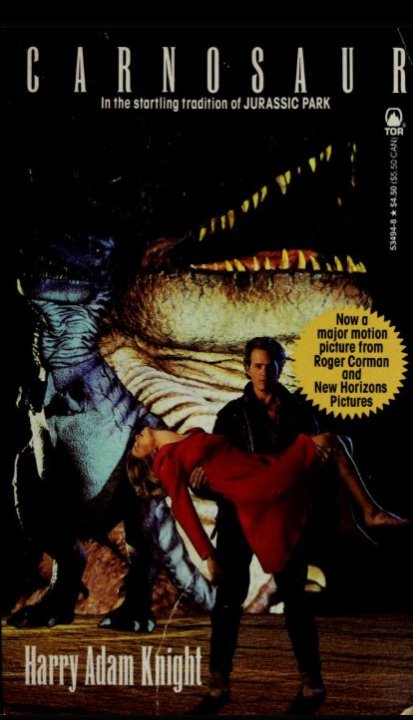 Usually I wait a while between books by one author. I waited 3 days after finishing Slimer to begin Carnosaur. (Although technically, this is a different Harry Adam Knight to the author of the other two books in this post as this one was actually written by John Brosnan by himself.) I don’t regret rushing into Carnosaur. It was lots of fun too.

A rich lad genetically engineers dinosaurs into existence. Sounds familiar? Well, this was actually written 6 years before Jurassic Park, and Carnosaur is set in a rural village in England rather than a remote island. Oh, and this has a lot more people getting eaten.

This was not a particularly clever or subtle book, but it had a shit-ton of dinosaurs and shotguns. If that doesn’t sound good to you, you’re probably a wimp.

One of the main characters in this novel is a violent English soldier who was stationed in Belfast in the early 1980s. This created an uncomfortable tension for me. I really, really wanted him to die horribly.

This is another book that delivers what it promises, lots and lots of minging fungus. Enough said.

At one stage, these books were fairly difficult to track down for a reasonable price, but both Slimer and The Fungus were reissued by Valancourt Books a couple of years ago. Carnosaur was made into a movie in the early 90s, and I assume the movie company has the rights to the novel or something as it hasn’t been republished. I read the movie tie-in rerelease on openlibrary. The cover of this version is wretched, but it beats paying $60+ for an original copy.

I don’t know how much my current living conditions had to do with it, but I really enjoyed all three of these books. They’re not groundbreaking high-literature, but they were a lot of fun to read. Brosnan and Kettle collaborated on some other books under a different name, and I’ll read those if I ever find cheap copies.