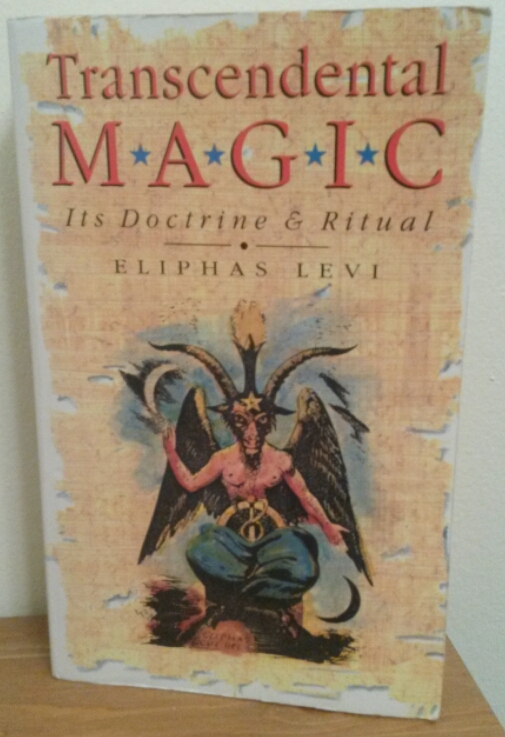 This book is a load of bollocks. I’ve seen it mentioned in other books, and I thought that I should check it out. In fairness, I was probably underwhelmed because I have come across these ideas in so many other books (Although they were bollocks in those books too.) There is a story that the secrets disclosed herein were once the private knowledge of a secret society to which Levi belonged*, but I think it would be unfair to blame anyone other than Levi for this stinking garbage heap of nonsense. Levi links the usual ancient traditions together and adds a bunch of his own bullshit into the mix to create a completely incoherent mess of esoteric diarrhea.

This is actually two books in one. The first is a book on the dogma of magic, the second is a book on the rituals. The chapters in each book correspond to each other, and if I were to read it again, I would read the corresponding chapters in pairs. I am almost definitely not going to read this book again though. The first ten chapters in each text are on numbers. For example, the second chapter is on the number two. For this chapter, Levi thinks of all the things that exist in pairs, and occults them. Cain and Abel represent the Yin and the Yang. Yin is the Angel Lucifer, but Yang is the Angel Michael. Yin depends on Yang, so death (Lucifer) depends on life (Michael). Death is a penis, but it is also life, therefore a penis is actually a vagina. Now this is of course corroborated by the two pillars of the temple of Solomon: they enclose the tree of life and the tree of knowledge, duhh! It’s all so obvious!

So each book starts off with ten chapters of that kind of crap. It’s only after the number chapters that Levi gets into necromancy and witchcraft. Those chapters are alright. There are some fucked up rituals described in detail. My favourite is the ritual that requires the necromancer to somehow put themselves in a position whereby they are assisting a priest in the celebration of mass on Christmas Eve. They must help the priest until the host is consecrated and then  interrupt the ceremony by yelling ‘LET THE DEAD RISE FROM THEIR TOMBS!” After this they run from the church to the graveyard, continually screaming. Wouldn’t it be amazing to see that happening? Levi also gives detailed instructions on the steps you need to take to become master of the Gnomes of the earth. Yep, this is all fairly pragmatic stuff…

The translator, A.E. Waite, provides lots of footnotes, most of which criticize Levi’s nonsense in a manner so harsh that one would wonder why he bothered with it at all.  Waite, who wasn’t exactly the most rational man in the world, describes Levi’s ideas as ‘fantastic’, ‘without authority’, ‘idle nonsense’, ‘incredibly bad’ and ‘made up out of his own head’. I also own his translation of Levi’s History of Magic, a book that I now doubt I will ever read.

The illustrations are cool though. The Sabbatic goat on the cover is quite deadly, and there’s a fair few images in here that I’ve seen elsewhere.  That’s the thing about this book; it has been used as a source for lots of other books that explain its contents far more clearly than it does itself (I would recommend Cavendish’s The Black Arts to anyone who’s interested.)

I was also delighted to find a brief reference to the tarte Bourbonnaise of Panurge. The Borbonesa tart is a dessert mentioned in Gargantua and Pantagruel. It is a “filthy and slovenly compound, made of store of garlic, of assafoetida, of castoreum, of dogs’ turds very warm, which he steeped, tempered, and liquefied in the corrupt matter of pocky boils and pestiferous botches” This is Rabelais’ description, not Levi’s. Levi only mentions the tart in comparison to the smell that might emerge from one of the potions described in the chapter on charms and philtres.

If you want to read a mess of mystical bullshit about the astral plane and tarot cards, then this is the book for you. Otherwise, skip to the chapters on necromancy, witchcraft and the Sabbath, and leave it at that.

*My source for that information was Wade Baskin’s Dictionary of Satanism, so it’s almost definitely untrue.

Please share the below image, and let’s hope somebody takes the challenge!