Penguin – 1978
The full title of this work is “Les Chants de Maldoror”, and it is supposedly a collection of “songs”  written by an extremely nasty individual. Imagine all of the bad guys of gothic literature rolled into one and you’ll get an idea of what Maldoror is like as a person. He’s equal parts Manfred and Melmoth, but he also has a little Dracula and Curval in him too. He hates man, god and almost everything else. Sounds pretty cool right? Well some of it definitely is. The parts where he recounts his crimes and insults god are  damn sweet. He isn’t just a little bit naughty either; he’s full on evil. He boasts about brutally torturing people and he’s a bit rapey too. I’m surprised more metal bands haven’t used the name Maldoror. I can only find one black metal band from Italy with the name, and they look absolutely shit.

This wasn’t a book that I rushed through. I enjoyed the protagonist’s horribly nihilistic outlook, but I read the book in July, and it felt wrong to sit down with it when the sun was shining. I had to wait until the hour of 12 before delving into this hateful work of misanthropy. Also, the prose is quite dense, and it was a bit of a chore to get through. Some of the sentences are ridiculously long (the narrator comments on this himself), and there’s no underlying plot to the book, so it can be difficult to follow.

Nobody knows much about Le Comte de Lautrémont, but his real name was Isidore Ducasse, and he died at 24, only a few years after this book was written. I would imagine that parts of this book are autobiographical and reflect the author’s outlook. There are brief incidents in the text where a hitherto unknown character appears and is treated as if he has been part of the story all along. These parts struck me as probably having meaning to the author alone; perhaps they are masked accounts of his own experiences. That’s one of the difficulties with surrealist writing though; the author is under no obligation to explain himself.

And this book is quite surreal. There are some truly mental parts in it. Some of them are entertaining; I particularly enjoyed Maldoror’s dalliance with a shark, but many are confusing and are made downright unenjoyable by frustratingly convoluted prose. This confusion is not accidental though, and the difficulties facing the reader of this book are undoubtedly deliberate. One of the opening lines of the book reads; “It is not right that everyone should read the pages that follow; only a few will be able to savour this bitter fruit with impunity.” Maldoror does not want his readers to enjoy these songs; he wants them to suffer. This is basically a deliberately discordant black metal album in the form of a book.

I wanted to like this book more than I did. It’s a cool idea; I just don’t think it was executed as well as it could have been. In saying that though, this is a translation, so maybe the fault lies with Paul Knight. Then again, maybe I just didn’t get it. This is definitely a book that you have to ‘get’ to enjoy. It’s surrealist fiction, so a load of it is utter bollocks that makes no sense. I would say that the grisly parts make it worth reading, they’re gross, funny and metal as fuck, but don’t expect to enjoy the whole thing. If you find yourself having a great time while reading this book, you are definitely doing it wrong.

This edition also contains Lautrémont’s poetry. Apparently he had gotten all of this negativity out when he wrote Maldoror, and his poems are supposed to focus on more positive things. I didn’t read them. I probably never will. The edition that I am reviewing also has a deadly cover. It’s from part of this painting by Anton Wiertz. 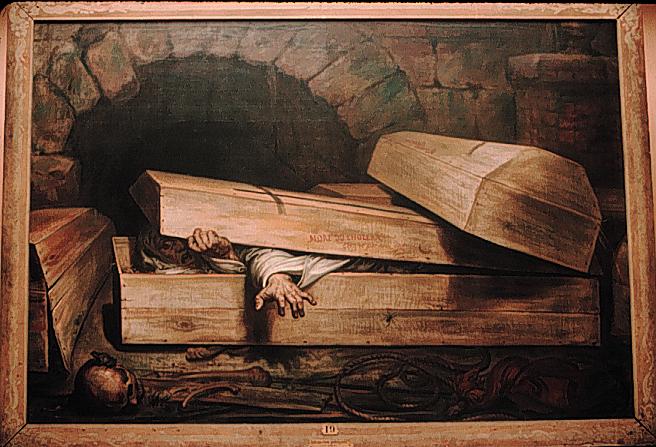 One thought on “Maldoror and Poems – Le Comte de Lautrémont”