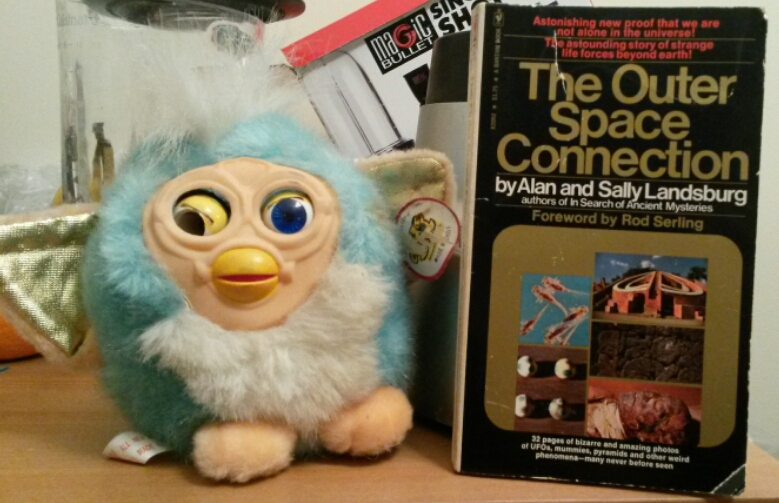 Well, here we go again; another dumb book about ancient aliens. This one is really bad too. It’s based on the making of a film that was itself based on this book. Does that sound awkward? Yeah, it is. To get the full picture, you really have to watch the movie too. (Don’t worry; it’s online.) The soundtrack is fucking awesome, and the guy from the Twilight Zone does the narration. It turns out that Alan Landsburg worked on Erich Von Däniken’s Chariots of the Gods movie (also available online), and it shows. (In fairness, he openly admits that he has been “doing that Von Daniken stuff” at the end of this book.) The writing is laughable at times, it’s written as a first person narrative about the shooting of the film, but it has a real Da Vinci Code feel to it. My favourite line in the book comes at the end of a paragraph discussing the disappearance of the Mayan people:
“Instead, they retreated deeper and deeper into undesirable places, seemingly in fear of contact with any other people. Why, damnit, why?”

So what’s being said in here that isn’t being said in the other stupid books I’ve reviewed on the same topic? Well, this one throws in the idea of cloning as an explanation as to how the aliens managed to get here. To plant the seeds of human life on Earth, the aliens would have to have travelled for hundreds of thousands of years. Cryogenics is ruled out as a means of prolonging life, and so in order for the crew to live through the journey, they would have filled up their spaceship with cannisters of human DNA, their own DNA at that. After a few years, one of the female crew members would impregnate herself with some of this DNA and give birth to a clone of herself. 25 years later, the clone would impregnate herself with yet another clone, and the process would be repeated until the ship finally reached Earth. Simple, right?

Landsburg doesn’t really go into detail on how this would work. Regardless of how large and advanced their ship was, I would imagine that the food supplies would have run out after a few thousand years even if the crew was made up of only a few people. I think the idea hinted at is that there is only one crew member alive at a time. (Quite similar to that movie Moon right?) So presumably the mother would have to sacrifice herself as soon as her clone/daughter was ready to take control of the ship. What would the clone do to the corpse? Well, considering the scarcity of meat aboard that spaceship, I reckon the only sensible thing to do would be to eat the body. Nothing should go to waste in space! Matrophageous spite; autophageous delight!

Ok, so that’s a nice bit of fantastic realism, but is there any evidence for this having happened? Of course there is! Scientists cloning axlotals [sic] found that the cloned versions of this variety of salamander end up with a slightly shorter body than the originals.  They are otherwise identical. That interesting fact is noted in one of the first chapters of the book, but its relevance isn’t made apparent until somewhere near the end. After the mention of this crucial piece of information, there are a bunch of chapters on the usual ancient alien garbage, including several discussions of the Mayans and their pyramids. The Mayans are praised as being far more advanced than any other peoples of their era. Mayan skulls with holes in them are presented as proof of their advanced medical skill. They  weren’t simply smashing each other’s heads open; they were removing cells from the brain to create clones! But wait a minute; how do we know that the Mayans were creating clones? Well, their skeletal remains suggest that the Mayans were fairly stocky.That is to say that they had shorter than average bodies, JUST LIKE THE CLONED OXLOTALS!!!

Brain transplants in 2000 BC

There’s tonnes of other crap in here; lots of utter shit about pyramid power and human auras. The stuff on the Bermuda Triangle was pretty cool, but it’s written in an infuriatingly credulous way, just like everything else in this book. There’s also a discussion on Vladmir Demikhov’s experiments on dogs. I had heard of these before, but I’d not watched the footage online. Fuck, it’s absolutely horrible. I guess that’s what Roky Erickson was singing about.

Pretty sure that’s just a monkey there mate!

I can’t say I’d recommend this book to anyone, but the movie might be enjoyable if you were high on drugs. I myself was not high on drugs when I watched it.

2 thoughts on “The Outer Space Connection – Alan and Sally Landsburg”