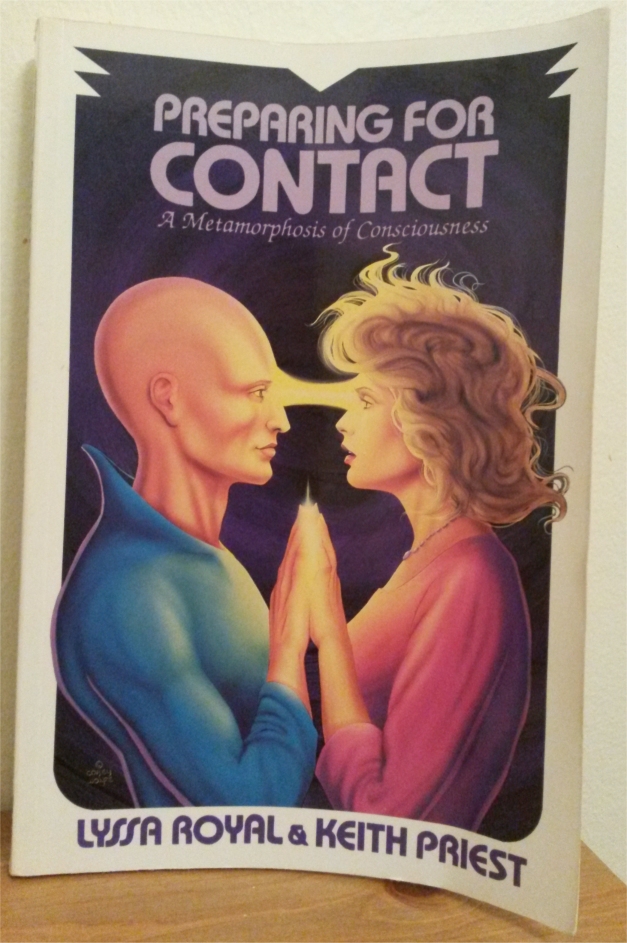 Worst of the blurst. This is a new low.

This is a book about how to prepare yourself to communicate with aliens. It’s made up of a series of messages that were sent from a several different extra terrestrial entities through a channeler named Lyssa Royal (now Lyssa Royal Holt). These entities are doing their best to help us prepare to change humanity’s mass consciousness in order to make free and open contact with the inhabitants of other worlds.

On deciding to read this book, I took one look at the cover and thought to myself; ‘Sweet Jesus, this is going to be worse than Whitley Strieber’s bullshit.” Oh, you can only imagine the hearty pat on the back that I gave myself when I opened it up to see that the first chapter opens with a quote from Transformation. (There’s another at the beginning of the 11th chapter, and the 10th opens with a quote from Communion.) Think about that for a second; the people who create this book actually look up to ol’ WhitStrieb.

Channeling is something that annoys me greatly, and nobody makes me want to publicly fill my britches with scat more than J.Z. Knight, the horrendously ugly mutant woman who has undergone failed plastic-surgery and claims to be a channel for Ramtha, a 35,000 year old, Atlantean paedophile. One day, I was watching a video of her and sticking pins into my gooch when one of the related videos caught my eye on account of its title being written in Chinese. I clicked it, and I was very glad that I had done so. It was a video of a bald man pretending to be an alien. At one point in the video, the alien’s accent becomes a hilarious mixture of Indian and the way Irish people sound in American movies. I became fascinated with this character, and I’ve spent more than a reasonable amount of time watching his videos. His name is Darryl Anka, and the alien he channels is named Bashar. Now this might seem only tangentially relevant, but as it turns out, Bashar actually appears in this book! Lyssa intrudes on Darryl’s turf and summons Bashar into her body in one of the final chapters of the book. Reading that part was like meeting an old friend.

Of course, there are others, most likely students of Anka or Priest, who summon the same types of aliens. Here’s another channeling Bashar.  This one seems particularly challenged. Fuck, the world is a silly, crazy place.

I’m not going to provide a cohesive summary of the book as that would require looking through it again. Instead, I’ll just mention a few of the more memorable ideas contained in this collection of silly nonsense.

There were legitimately interesting aspects of this book. I was actually quite impressed with the comprehensive nature of the dogma that the authors are setting down. If you want to hear voices in your head badly enough, you will. The only difficulty with this will be for you to accept that the voices in your head are other than your own. If you manage to convince yourself that these voices are actually aliens, even if they’re only mildly alien versions of yourself, then it’s going to be quite difficult to argue with you; however, although I can’t prove that the voices in your head aren’t aliens, I can avoid you and tell all my mates that you’re a stupid cunt.

This is basically a new-age self help book with a bit of science fiction thrown in to spice it up. (It’s full of the same “let’s enter the next stage of human evolution” crap as Morning of the Magicans and the last chapter of Wilson’s The Occult.) The ideas are utterly moronic, but the author’s aren’t trying to convince their readers to kill themselves; they’re trying to encourage people to get together and be creative and open-minded. It was a shitty experience to read this book, but that’s because it was boring, repetitive and stupid. At least it wasn’t boring, repetitive, stupid and morally reprehensible like a christian self help book. I’ve also watched some videos of Lyssa Royal (skip to 12:50 to get to the summoning bit), and she’s simply too silly to dislike.

This book was written more than 20 years ago, and those 20 years have seen none of its predictions come true. That being said, there’s still people who are into this nonsense. It really does baffle me when I think of how weird and insane the human race can be. It seems that some people feel the need to believe in something greater than themselves, and all things considered, I suppose that telepathic aliens aren’t the lamest available option.

Oh, and just to remind you; there is a facebook page for this blog for anyone that wants to keep updated with all of the newest posts.

4 thoughts on “Preparing for Contact: A Metamorphosis of Consciousness – Lyssa Royal and Keith Priest”