This, my friends, is what it’s all about. Fuck your fancy hardback collection!

How could a person possibly enjoy Simon’s Necronomicon if they’ve never heard of Cthulu? Could they possibly feel the full impact of Lovecraft’s Mountains of Madness having never before encountered the dread cry of “Tekeli-li!”? Haven’t you ever noticed the references to Pallas Athena and the Balm of Gilead in Poe‘s the Raven? They couldn’t have made much sense to you unless you were familiar with Greek mythology and Biblical lore. Speaking of mythology, isn’t the Simon Necronomicon, the text that we started off with, basically just a silly version of the Enuma Elish, the Babylonian creation myth?

Even the silliest, most entry-level texts of Occultism require an awful lot of background reading if they are to be understood and fully appreciated.

“Occult” literally means hidden, and many “Occultists” out there limit their research to the esoteric. Occultism is generally concerned with spirituality and the supernatural, and many “occultists” that I have encountered have little to no interest in the major world religions, history, philosophy or science. I personally fail to understand how they can comprehend the Hidden without first studying and attempting to understand what is in plain view.

The internet has made countless esoteric texts instantly available to the neophyte. A few clicks on wikipedia and Curious George ends up bypassing Homer and the Bible and gets straight into nutty books filled with references to these works. These n00bs can’t possibly understand the stuff they’re supposedly reading.

Maybe I’m just getting old. I have similar complaints about kids these days being able to download obscure black metal records when they’ve never listened to Megadeth or Anthrax. When I was a teenager, we had to buy albums and check the thank-you lists in the cd booklets to find the names of other cool bands. Nowadays a kid can go from being a Justin Bieber fan to a devotee of obscure Finnish death-doom in just a few clicks. Start at the start or go die in your posehole, you annoying little snots.

And music, while obviously very different to literature, can also contain references to other music. (I felt chills the first time I heard the singer from Crypt Sermon bellow out “Fool, fool!” in this track, a song that is incidentally based on a story from the Bible. If you don’t understand the “Fool, fool!” reference, please abruptly find the closest exit and leave the hall. (That’s another heavy metal reference btw.)) This being said, a person can certainly enjoy a song without having heard older songs of the same genre. References within music (and fiction) generally serve aesthetic purposes.

Occult texts are a little different though. Their writers often deliberately attempt to obfuscate their message, and esoteric references are one of the more popular methods of doing so. These references, while often having an aesthetic quality, primarily serve as what I’ll refer to as “initiation bridges”. You don’t get to cross the bridge and pass on to green fields of understanding until you’ve done your research and found out what the reference means.

Some of my books on Mythology

No matter how much background reading you do, you’re bound to run into these initiation bridges on your quest for secret knowledge. In my opinion, however, the occult adventurer is better off starting off on their quest with at least some of their homework done. If you want to become a psychologist, you need to study the history of psychology. Why should it be any different if you want to be a magician?

If you want to be a Satanist, please read the Bible and familiarize yourself with who Satan really is. It strikes me as bizarre that a person whose religion is named after a character from a book would not have read said book. Bizarre, but not surprising; Christians are in the same boat, with the same book. Hard copies of the Bible are widely and cheaply (if not freely) available, and it is my firm belief that every Christian, Satanist, atheist and occultist should have a copy of it on their bookshelf for reference. I have a few. 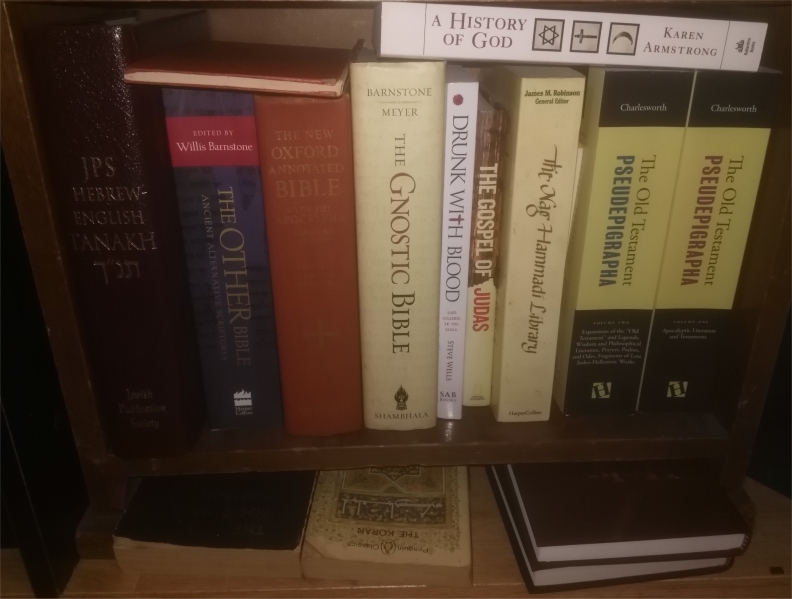 I recently finished reading Liber Falxifer, a grimoire that I can’t imagine making much sense to anyone who isn’t familiar with Gnosticism and the book of Genesis. Indeed, it was my ruminations on that book that led to this post. Check this out:

I also think it’s fair, and even important, in this situation, to judge a person based on the types of books NOT in their collection. His six books doubtlessly contain references to texts not in his possession. Does he just use wikipedia to check these references? Don’t get me wrong; I use the internet to research stuff all the time. Just remember that in this case, this person has thousands of dollars to spend on books, and it very much seems that he wants people to know that he’s a book collector. It looks like he has deliberately limited his purchases to obscure, expensive books, and as you can tell, this pisses me off. Books are for reading, not for showing off.

Yeah, ok. I am obviously guilty of showing off my book collection at every given opportunity, but at least I actually read them.

You might accuse me of jealousy, and while I can freely admit that I’m jealous of anyone who clearly has fewer responsibilities than I, I would not trade my extensive collection of trashy paperback classics for a much smaller collection of far more expensive texts. For a thousand dollars, you could buy one copy of Liber Falxifer from an Ebay auction or literally hundreds of peculiar and interesting paperbacks from library book sales and second hand book stores. Which choice is going to give you more hours of entertainment? Which choice is going to give you more knowledge?

Interestingly enough, the author of Liber Falxifer seems to agree with me on the price issue. In an interview he actually encouraged people to download pdf versions of his sold-out books rather than paying anything over the original sale price for second hand copies. I have to say, I respect him for that. The original prices for his works are reasonable for nice books put out by an independent publisher.

You see, I understand that some things are worth more than others, but just as an expensive video game is useless without a console, so too is an occult book without an appropriate amount of background knowledge. I don’t think it controversial to say that Occultism is about knowledge, and spending a ridiculous amount of money on a rare occult book does not make you a knowledgeable occultist.

I’m already seeing about 5 more connections between these texts.

I had an English teacher when I was in secondary school who used to say, “You can buy fashion, but you can’t buy style.” I’ve been struggling to make a very similar point as succinctly. To sum up this post then: Any fool can buy books, but true understanding of the Occult is available only to the dedicated student.

The practical value of studying the occult is a separate matter, one which I might address in the future. For now, it shall suffice to say that personally, I reckon most of it’s absolute rubbish.

To end on a positive note though, let us remember that while many texts require extensive background reading, these texts will likely also lead to further reading. One of my favourite things about reading is finding the name of some curious book being mentioned and then going out and tracking down a copy, only to find it filled with references to other curious tomes. You’re never going to run out of books to read, thank goodness.

“Not for sale. Just showcasing my collection as of 2017.”

8 thoughts on “On Reading and Collecting Occult Books”