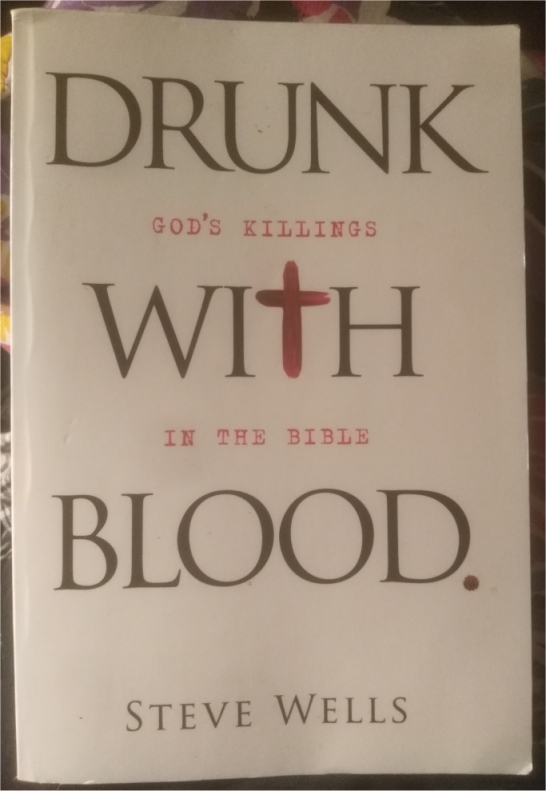 I read (past tense) the Bible largely out of spite. I went through the whole thing, chapter by chapter, underlining or highlighting bits that I thought were silly or violent. Needless to say, it took a lot of ink. I did a Bible post on this blog, but it was a fairly general overview of the entire text, and I didn’t get into specifics. When it comes to a text like the Bible, there’s not much a person can say that hasn’t been said before.

While I didn’t bother to get into specifics, Steve Wells has been doing so on his sites the Skeptics Annotated Bible and Dwindling in Unbelief since 1999. In this book, Drunk with Blood: God’s Killings in the Bible, he examines each murder committed by God throughout the events of Bible. It’s a bit like a true crime book about the most insane and successful serial killer of all time. Using the numbers provided in this text (which are sourced from the Bible itself), I worked out that throughout the Bible narrative, God was murdering between 500 and 7000 people a day on average.

The material in the book is well organized, and Steve Well’s comments are often very funny. It does get a bit boring at times, but that’s not really the author’s fault, and in a way, the offending sections make the book more effective. These boring passages highlight the fact that the Bible should be seen as nothing more than a collection of repetitive folktales from the iron-age.

Keeping that in mind, I sometimes felt a bit sorry for the Bible when reading Wells’ criticisms. He’s interpreting it literally, and for most texts of this era and genre, I would say that this would be a fairly silly thing to do. It would take all of the entertainment out of the old Greek or Irish myths if you were to take them at face value. Of course, very few people have taken literal interpretations of the Greek and Irish myths to enforce their perverse ideals upon others in the last thousand years, so I completely understand the author’s approach. I just want to put it out there that the Bible is actually a really interesting resource for entertaining stories and cultural insight. Just please understand that it’s a book from history, not a history book.

It has been long enough since I read the Bible for me to have forgotten big chunks of it. Reading this book reminded me of Biblical gems such as the tale of Elisha and the children (2 Kings 2:23-25). Elisha was a mate of the prophet Elijah. One day, he was out and about when a group of 42 children teased him for being bald. Luckily for Elisha, his merciful and forgiving God sent two bears in to kill the children. He didn’t give them a dose of diarrhea or a headache or have their parents talk to them about being polite. He had their little bodies torn limb from limb by a pair of nature’s fiercest animals.

Will many Christians read Drunk with Blood and change their minds? I doubt it. If they haven’t read the Bible, the book where all this horrible shit came from, why would they read a criticism of it? I’d imagine that most non-believers wouldn’t have much time for this kind of thing either; I mean who cares if the imaginary man in the sky is a murderer? I guess that leaves the annoying people who like to think that they know more about scripture than the majority of believers to enjoy this book. 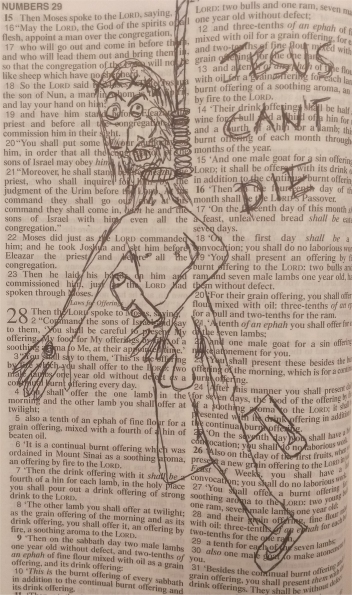 While we’re on the subject of Bibles, I “found” this illustration in a hotel room Bible over the summer. Thought this would be a good opportunity to post it.