As far as I know, I’m not a Marxist. I encountered a small amount of Karl Marx’s writing when I was in university, but I’ve never read Das Kapital or the Communist Manifesto. I certainly have no interest in defending or attacking Marx’s views, and even if I did, my horror/occult book blog would not be the place to do it. It might seem strange then that this blog is the perfect place to attack a book critiquing Marx, but there you go.

This book, you see, claims that Karl Marx, the man who famously referred to religion as “the opiate of the masses”, was in fact a devout theistic Satanist. Again, I’m not an expert on Marx, but the general consensus is that we was actually an atheist who had complex opinions about religion. The writer of this book, a mad person named Richard Wurmbrand, builds his case against Marx by exaggerating or misreading every single time the words devil, evil, demon, etc., appear in the entire, enormous corpus of Marx’s writings. Richard Wurmbrand probably read Marx’s books, but when you look at this title of this book, you’ll notice that it’s not a biography. It’s called Marx and Satan. To me, that suggests that this book should be equal parts Marx and Satan, or that at least the same amount of research should have been done on both. Unfortunately, this is not the case. Richard Wurmbrand’s concept of Satanism is contradictory, sensational, inaccurate and absolutely stupid. I may not be an expert on Marx, but I’ve read enough books about Satanism to I feel qualified to point out a few problems here.

First off, at several points throughout his book, Wurmbrand notes that his cause is particularly difficult to fight for because of the secretive nature of the Satanists. He uses the phrase, “the highly secretive Satanist church”. Soon thereafter, he quotes from the Satanic Bible. Despite the aforementioned “highly secretive” nature of the Satanic church, Wurmbrand was somehow been able to track down a copy of their Bible. The Satanic Bible, for those of you who don’t know, is a widely available book that has now gone through 30 printings and sold a million copies. I know that this is the book he’s talking about because I have a copy on my shelf. The Church of Satan, the organization that puts that book out relies on new membership fees and book sales to survive. They also run a popular twitter account with 160,000 followers. You could accuse them of many of things, but secretive they are not.

Now, I know that there are many branches and varieties of Satanism, but by quoting from the Satanic Bible, Wurmbrand has clearly identified the LaVeyan brand of Satanism as the one he is discussing. I don’t think that it’s at all unreasonable for me to make that claim. (Why would he quote from a book if it wasn’t directly relevant to the point he is making?) Ok, but this is interesting because after referring to these Satanists as highly secretive, he also claims that “The Satanist sect is not materialistic.” Of course, the Church of Satan is, and always has been, materialistic. On their website, they boast about their “materialist philosophy“. Obviously, their website wasn’t available when Wurmbrand was writing his book, but this materialist philosophy is clearly propounded in the book that Wurmbrand quotes from. So allow me to recap here. Despite Wurmbrand’s claims to the contrary, the Church of Satan is not “highly secretive”, they are not “not materialistic”, and they are certainly not secretive about their being materialistic. I have no personal reason to defend the Church of Satan here. I am merely pointing out facts that are clearly apparent to anyone who has done even the smallest amount of research on LaVeyan Satanism.

But how did Wurmbrand get things so wrong? How did he misinterpret the Satanic Bible in such a remarkable way? Well, to understand that, let’s take a look at the quotations that Wurmbrand actually used:

“The Satanic Bible,” after saying “the crucifix symbolizes pallid incompetence hanging on a tree,” calls Satan “the ineffable Prince of Darkness who rules the earth.” As opposed to “the lasting foulness of Bethlehem,” “the cursed Nazarene,” “the impotent king,” “fugitive and mute god,” “vile and abhorred pretender to the majesty of Satan,” the Devil is called “the God of Light,” with angels “cowering and trembling with fear and prostrating themselves before him” and “sending Christian minions staggering to their doom.”

Well, yeah. That clears things up a bit. Apart from the first quote there, the crucifix symbolism one, none of those quotations are even from the Satanic Bible. The rest are from the Satanic Rituals, an entirely separate book by the same author. That’s not all though. I did a little research and I found the following passage from a 1977 book called Don’t Waste Your Sorrows: Finding God’s Purpose in the Midst of Pain by Paul E. Billheimer. 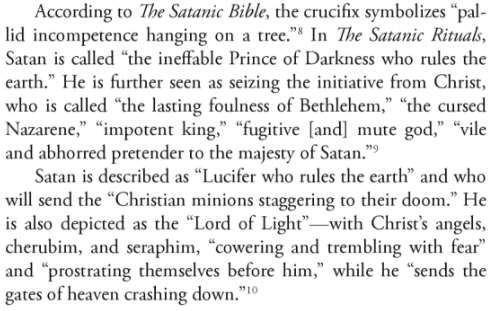 Compare the Billheimer quote to the Wurmbrand one. Notice any similarities? Billheimer’s book was published 9 years before Wurmbrand’s. Now, I don’t like jumping to conclusions, but it’s entirely clear that Wurmbrand plagiarized Billheimer’s work. He also made an absolute fool of himself in the process. To provide evidence for his critique of Karl Marx, Richard Wurmbrand quoted from books that he himself had never read. In doing so, he not only highlights the fact that he knows nothing about the concept that he has chosen as the topic for his book, he also proves that he is a cheat with a poor eye for details.

So if he didn’t read the Satanic Bible, what texts did he read during his research for his book? Well, at one point in his text, he directs his readers to Psychic Discoveries Behind the Iron Curtain for more information on occultism in Russia. That particular book was one of the worst I have ever read, but it’s the kind of book that this Wurmbrand guy considers trustworthy. 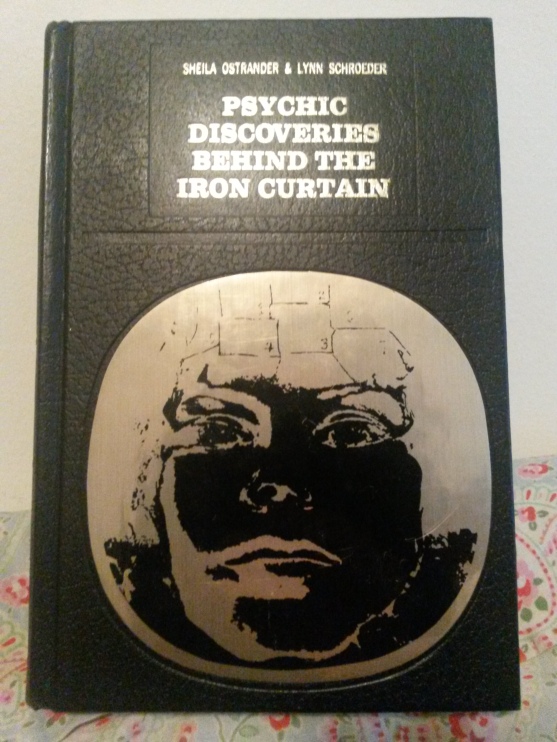 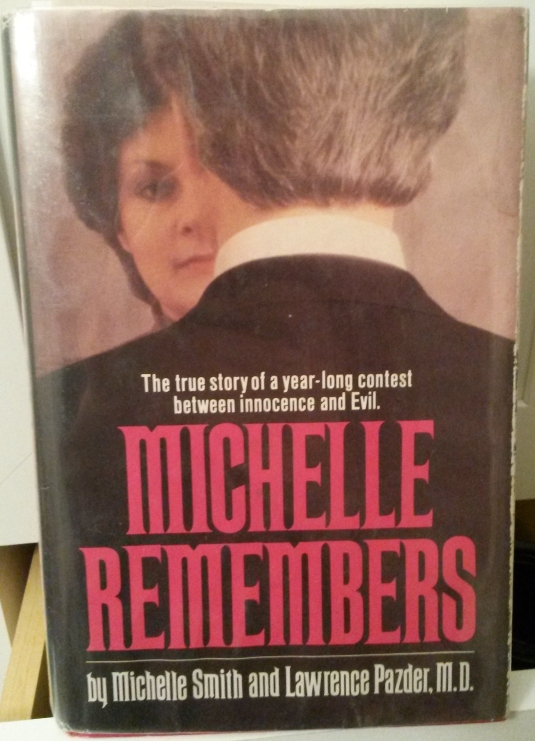 Psychic Discoveries was bad, so bad in fact that I referred to it as both a “horrendous pile of nonsense” and “a load of shite” in my review, but it’s really only guilty of being boring and unconvincing. You come away from a book like that pitying its authors rather than disliking them. If you want the really infuriating stuff, you’ve got to look towards the religious nutjobs. The most popular post I’ve ever done on this blog was about a book called Michelle Remembers. That book made me really angry. It’s about a mad woman who claimed that she had been a victim of Satanic ritual abuse as a child. It has been proven to be complete and utter bullshit on many counts. It’s nothing more than the sinister fantasies of a sex-pervert with a low IQ. Hey, guess what! Richard Wurmbrand bought it hook, line and sinker, and he quotes extensively from that book of absolute garbage. Not only that though; the quotations that he uses are from one of the most cringeworthy and ridiculous sections of the book, the Devil’s nursery rhymes. Anybody who has ever done a lick of research on Satanism would be able to tell that the entirety of Michelle Remembers is rubbish, but even the most gullible Christian should have a hard time swallowing the notion of the Devil singing childish rhymes to a bunch of evil Canadians. It’s not a problem for Wurmbrand though. He unquestioningly presents it as damning evidence in his case against Karl Marx.

Towards the end of the book, he also mentions the whole “if you play Stairway to Heaven backwards…” thing. I couldn’t understand why he did this in a book about Karl Marx, but he did.

I haven’t really said much about the central idea of his book, but I really don’t feel like I need to. I have successfully shown that Richard Wurmbrand was completely oblivious to both the nature and realities of Satanism and argumentative writing. There is absolutely no direct evidence for the claims that he makes. He never read some of the source material on Satanism from which he quotes, and I have no real reason to presume that his research on Marx was any more thorough. Other sources that he chose to include in his book are completely bogus. Throughout the book, Wurmbrand comes across as gullible, arrogant, hysteric, and paranoid; the guy was clearly mentally ill. He had had a tough life, spending 14 years in communist prisons (There’s a poorly animated movie about this on youtube if you’re interested), so it’s understandable that he wasn’t a fan of Marx. I hope that the process of writing this book was therapeutic for him.

Well, there you go. Marx and Satan, what a wonderful way to celebrate 3 years of this blog. I’ve reviewed 177 books so far, and I have no plans on stopping soon.

7 thoughts on “Marx and Satan”