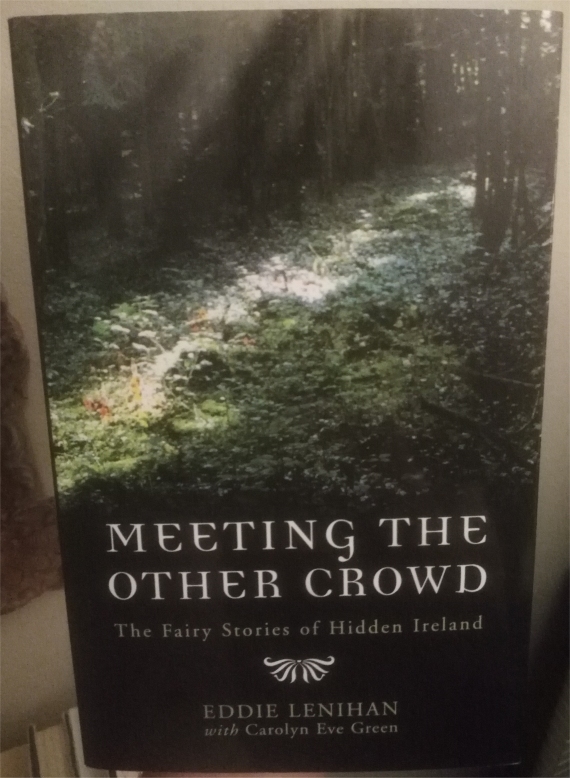 Meeting the Other Crowd, The Fairy Stories of Hidden Ireland – Eddie Lenihan
Gill and Macmillan – 2003

I first encountered the author of this book in a Tg4 documentary about Alice Kyteler, the witch of Kilkenny. Just looking at him, you can tell that the man is a legend. There are loads of videos of him telling stories online, and you’d be better off watching them than reading this review. About 3 years ago, I was visiting Ireland and somehow ended up in the Freemason’s Hall in Dublin. I got chatting to one of the lads there about books on Irish folklore, and he recommended this. I bought it the next day.

The astute reader will have noticed a decline in the amount of non-fiction being reviewed on this blog recently. This is largely due to my developing revulsion towards occultism. I don’t know whether it’s having a kid, a job and less time or if it’s just that I’ve come to know what to expect from new-age imbeciles, but I simply don’t have the patience to wade through the sort of rubbish that I used to review. Standing in front of my bookshelf, trying to choose between an outdated book about aliens and a pamphlet about magic beans, I cast my eyes to the ground in despair. It was on its way to the ground that my line of sight crossed the copy of Meeting the Other Crowd on my bottom shelf, wedged in between books on the Holy Grail and serpent worship. Yes, this book would work. The topic is occult in every sense of the word and from what I had seen of the author, I knew it would be interesting

Fairies though. Isn’t that a bit lame?

Let’s make this very clear. The fairies of Ireland are not the pleasant, wingèd creatures, fluttering about and turning little girls into princesses that some might expect. Fairies are wrathful, violent, and manipulative entities that live in a shadow world, emerging to kidnap children and seek violent retribution for any actions they have perceived as wrongs against them. They’re not objectively bad or evil, but they are certainly the kind of things that are best avoided.

This book is a collection of stories that Eddie Lenihan collected over what seems to have been several decades. He traveled around Ireland, recording old people telling the fairy stories that they had heard throughout their lives. The tales have been transcribed fairly precisely, and they retain a flow of speech that makes it easy to imagine the voice of the teller as you’re reading their words. While all of the stories are followed with a brief commentary by Lenihan, I would have liked a little more information about the story tellers and when they were recorded.

The other issue here is the consistency of the different stories. Some of these accounts are absolutely fascinating, but some are little over a page long and present only minor variations to other stories in the collection. I suppose this was probably inevitable given the nature of the book though, and I’d prefer for these shorter stories to be included than omitted.

Unlike the authors of much of the occult material that I have reviewed on here, the tellers of these tales had, as far as I can tell, an honest conviction in the stories they were telling. These people weren’t out to proselytize or to make a buck. They were telling stories that they had been asked to tell. That in itself makes it much easier to both enjoy the stories as stories and to consider them as something more than imaginary.

A skeptic might claim that these accounts are the attempts of uneducated, rural people to rationalize the traumatic events in their lives (infant deaths, thefts, abductions) but that interpretation doesn’t do these stories justice. Whether or not the events in these tales occurred precisely as they are described has no bearing on their beauty and cultural worth. While I’m not entirely convinced about the objective existence of fairies, I don’t think I’d ever enter a Fairy Fort, just to be safe.

I’d recommend this book for anyone with an interest in folklore and/or malevolent shadow people. I’m looking forward to reading more of Lenihan’s books in the future.