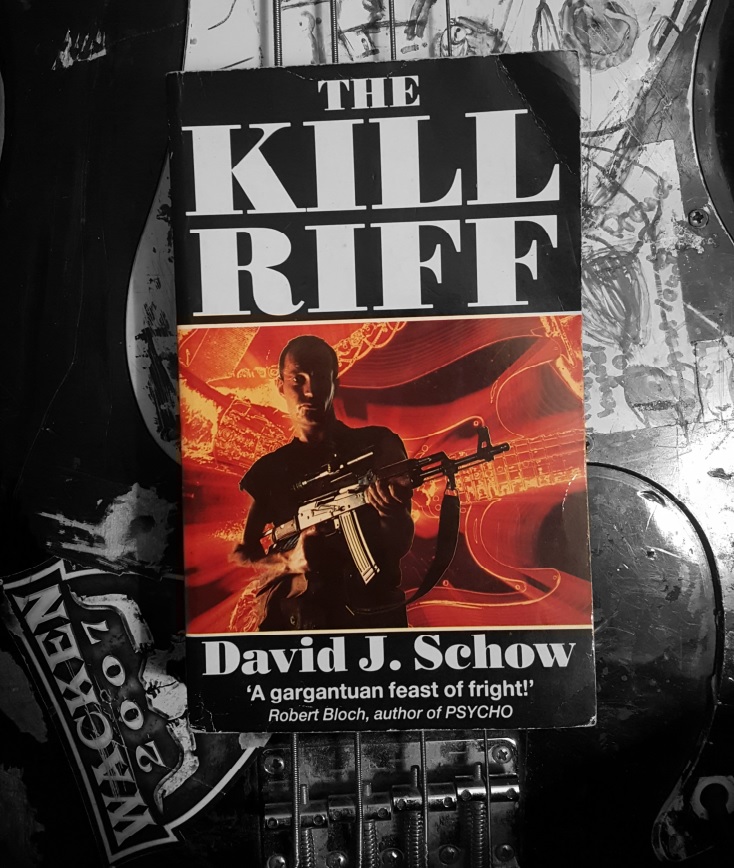 I wanted to like The Kill Riff. It has a cool name, it has cool covers, and it’s the first novel by the guy who supposedly coined the term “splatterpunk”. Everything about it seemed promising. Unfortunately, this was a fairly crumby novel.

It’s about Lucas, a dude who spends his time hunting down members of a rock group because his daughter died at one of their concerts. The narrative switches between his story and the experiences of Gabriel Stannard, the singer of Whip Hand. Regardless of his responsibility for the death of Lucas’s daughter, this Gabriel guy deserves to die for being such a damn poser. Somewhere in the second half of the book, it becomes apparent that Lucas is also a huge arse, and by the end of the book, I was really hoping that both of these lads would die horribly.

The main characters are obnoxious, and the secondary characters are described in a frustrating amount of detail. There are whole chapters on characters that have no bearing on the actual story. There are also embarrassingly lengthy discussions of psychology that do nothing but slow things down. The book does contain some scenes of brutal violence, but they’re lost in a frustratingly slow plot. The Kill Riff weighs in at 400 pages. It would have been far more effective and enjoyable at 200.

David Schow does his best to let his reader know that he is actually a rock fan. He doesn’t care for post-Roth Van Halen, and he includes a paragraph on the Mentors for no reason. It’s usually a novelty when an author name-drops a band I like, but Schow does it so often that it actually seems a bit desperate. We get it bro, you like guitar solos.

I’m being pretty negative here. I have read books that were far, far worse than The Kill Riff. I just think this was a wasted opportunity. It’s a solid idea for a book, but it literally needed more killer and less filler. I’ve got a few more rock’n’roll themed books lined up that I’m hoping to finish by the end of the year. Stay tuned.