Philip St. George III, aka the Satan Sleuth, is wealthy, vengeful, sexy, equipped with ridiculous gadgets, and he loves solving spooky mysteries. Yeah, he’s basically a mix of Batman, James Bond and Scooby Doo. This is a series of three novels that I first read about in Paperbacks from Hell. I spent a stupid amount of time and money tracking down old paperback copies, but I saw a few days ago that you can actually buy kindle versions off Amazon.

The Satan Sleuth #1:  Fallen Angel
Mews Books – 1976 (First Published 1974)
This is the Satan Sleuth’s origin story. A gang of weirdos break into a young millionaire’s house and kill his wife in the name of Satan. He gets super upset and decides to hunt them down for revenge. Luckily for him, the Satanists come back to his house right after he has filled it with Satanist catching equipment. What follows is essentially a slightly less violent version of Home Alone.

This is the most dated book in the collection. Of the four criminals, one is described as “A walking moron, even if she was the best and free-est piece of tail in the world. With the biggest boobs.” She is repeatedly and brutally beaten and berated by her boyfriend for being dim. The Satan Sleuth shows her no leniency despite the fact that she was clearly coerced into partaking in the murder by her brutal and manipulative partner.

Another of the Satanists is “gay as a green goose when the bare asses were down”. He is also referred to as a “Fruitman”, and a “damn pineapple”, and it is insinuated that he gets off on brutally murdering a woman because he is gay. This kind of stuff is pretty distasteful in 2019, but this book was a written almost half a century ago by a man who was approaching 50. It’s hardly surprising.

Early on in the novel, the hero decides to do some research on Satanism so that he can understand his enemies. He gives his lawyer a list of books on the occult and has him track these down. I recognised a few of the names on the list, but some I had never heard of before, despite their amazing titles. I had to do some sleuthing myself to figure out which were real and which were Michael Avallone’s own creations.

Possession by T.K. Oesterreich, The Satanic Mass by H.T.F. Rhodes, During Sleep by Robert Crookall, The Magus by Francis Barrett, Timeless Earth by Peter Kolosimo, Gypsies, Demons and Divinities by Elwood B. Trigg, Your Sixth Sense by Brad Steiger and The Satanic Rituals by Anton La Vey are all very real books.

Where the Devil Walks by Marcel Alevoinne sounds great, but the author’s name struck me as rather similar to Michael Avallone. It turns out that Marcel Alevoinne was actually a pseudonym that Avallone used to use to order take-out.

Lucifer, My King by Jean-Anne de Pré also sounds incredible, but I discovered that Avallone used Jean Anne de Pré as a pseudonym for several gothic novels including The Third Woman, A Sound of Dying Roses, Warlock’s Woman, Die, Jessica, Die and Aquarius, My Evil. Unfortunately, I can find no evidence to suggest that a book called Lucifer, My King was ever written

Mark Dane, the author of Beyond our Ken is yet another of Avallone’s many pseudonyms.

This leaves one book, The Blask Mass (sic) by Sidney Stuart. I couldn’t find anything on this one online. It turns out that Sidney Stuart was the name of one of Michael Avallone’s early agents, so it’s likely that book is also a fake. 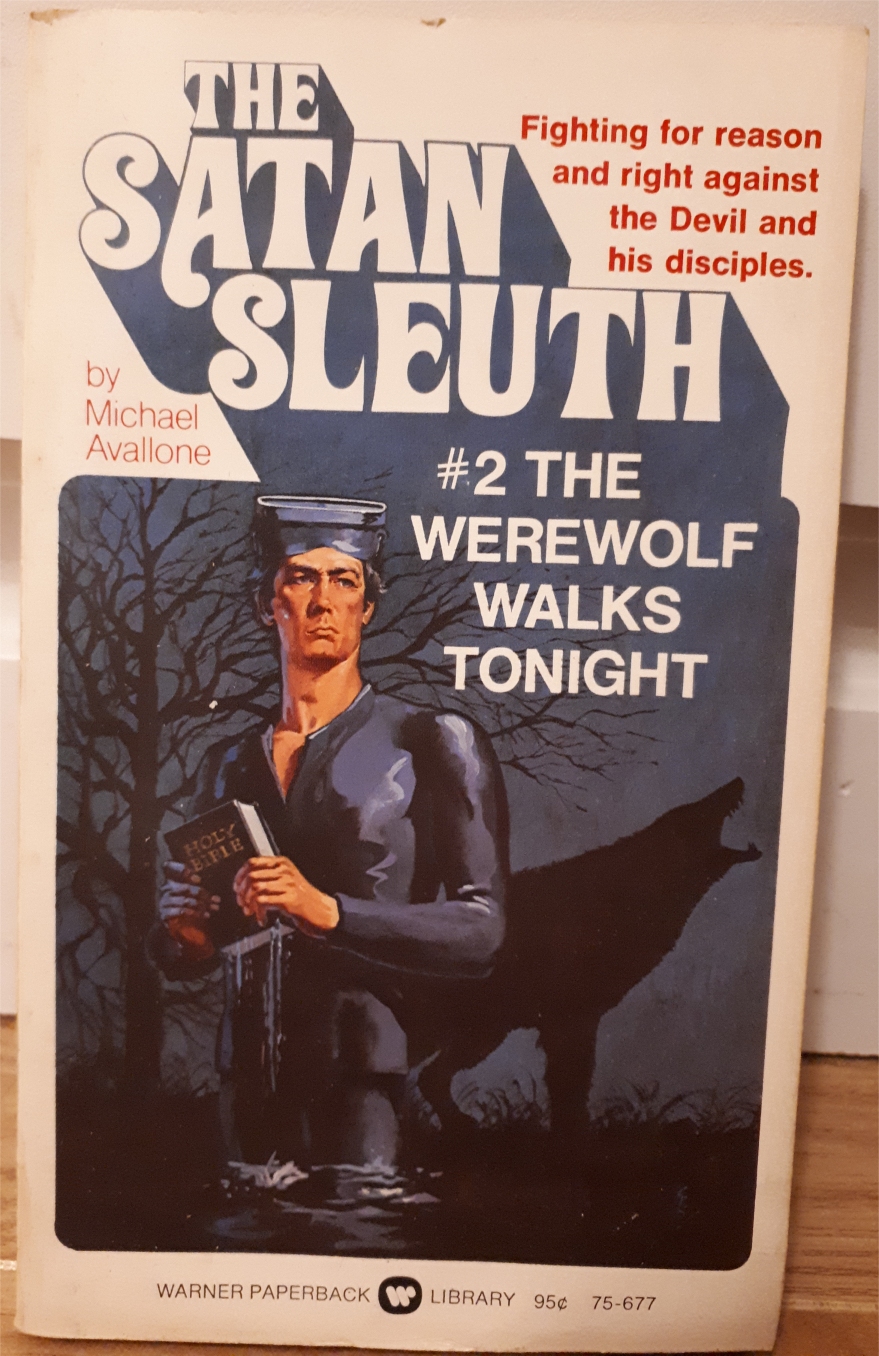 This one is about a werewolf instead of Satanists. It was not published as part of the UK Mews edition of the series, so my copy of this book and my copy of Devil, Devil (the third book in the series) are both labelled #2 on their covers. I didn’t like this one as much as the other two. Maybe the Brits felt the same and that’s why they chose to leave it out.

The most interesting part of this book was the way it pushes the reader back and forth between believing/not believing in the supernatural. There are times when the text flat out says that nothing supernatural is occurring and other times when it says the opposite. In truth, I’m a bit unsure as to whether this was intentional or just sloppy writing. The time sequence in this one is confusing too, and I can’t help but feel that it would have benefited with a bit of proofreading.

Oh, and this book features another mentally challenged woman with “splendid round breasts” being brutally raped. She is referred to as both “a peacherino” and “prime cut beef”.

This was probably my favourite out of the three. Not only does the Satan Sleuth find himself in the clutches of a coven of evil Satanists, but the ringleader of the coven is named Catharine Copely! Any Satan Sleuth worth their salt will surely recognize the Satanic relevance of the name Copely. Canon Copely-Syle, the strange mix between Montague Summers and Aleister Crowley, is the antagonist in Dennis Wheatley’s classic To the Devil – a Daughter. The Satan Sleuth series was written more than 20 years after Wheatley’s book, so maybe Avallone had read it and decided to pay homage. (If not, there’s some weird synchronicity going on. Copely Woods is also name given by Budd Hopkins to an area of high UFO activity in the Eastern United States.)

The women in this one still have big jugs, but they’re not as dim as the ladies in the other entries of this series. The main antagonist here is female, but unfortunately, she meets her doom after being charmed by the Satan Sleuth’s snake. She decides not to sacrifice him to Satan after seeing him lying naked, unconscious and strapped to the altar. “But this man – this intruder – whoever he truly was – was gifted in every conceivable department. He was superbly endowed. Pan would envied him for his incredible appendage. The principal male tendon was a thing of beauty, even dormant and idle. The Ram’s staff!” Sister Sorrow may not have been mentally deficient, but she was unable to resist a nice juicy cock.

Avallone is infamous for the rate at which he wrote paperback fiction. To be honest, I got the sense that these three books were churned out fairly quickly. There’s a few spelling mistakes in each of these novels, and Avallone is remarkably fond of sentence fragments. Really. So many it’s silly. Seriously. Also, in the last book it seems that he’s using the word “cockamamie” at least once every two pages.

When my copies of these books arrived, I saw the following line on the back cover of Fallen Angel and was instantly satisfied with my purchase.

Dennis Wheatley, for any Philistines reading this, is the author that made me want to start this blog. After having read all three Satan Sleuth novels, I have to say that aside from dodgy writing and less than progressive depictions of women and homosexuals, Avallone’s books have very little in common with Wheatley’s. Black magic is a powerful force in Wheatley’s novels, but the supernatural is always presented as a farce in the Satan Sleuth series. Avallone would later claim that this was the reason that this series didn’t get more attention (source). I reckon he was right about this. By the time I got to the third book, I knew that anything spooky that happened would be explained away later on. This cuts out a lot of suspense. Why did he write his books this way? Well, I reckon that it had something to do with the fact that Avallone, despite what it says on the blurb at the back of Fallen Angel, was not nearly as knowledgeable on Satanism and Black Magic as our Dennis.

At one point he refers to the werewolf as a Lycanthrophobe, and when his hero is going up against a team of Satanists, Avallone has him read a bunch of books on ESP, Ancient Aliens and fairies. There’s no rhyme or reason to the Satanism presented in the Satan Sleuth novels either. The Satanists in the first novel are Satanists by name only. Sure they murder a woman for the glory of Satan, but there’s no real spiritual or philosophical motivation behind their crime.  None of them believe in what they are doing. They’re just a bunch of drugged out social outcasts who occasionally say dumb things like, “God sucked. Lucifer was right. Make way for Beelzebub!”

The last book presents a Satanism far closer to the Satanism presented in Wheatley’s novels, but unlike Wheatley, Avallone doesn’t manage to explain why the Satanists are acting the way they are. They’re just bad for the sake of being bad here. There’s a few references to the Church of Satan that suggest that Avallone didn’t really know what he was talking about.

Anton LaVey’s Satanism deserves to be criticized, but it’s not fair to present his followers as the kind of people who murder and decapitate young women. I’m not misrepresenting things here either. Sister Sorrow, the villain of Devil, Devil is seen reading from The Satanic Bible only a page after Avallone quotes from the Satanic Rituals, LaVey’s companion text to his Satanic Bible. I can’t imagine any way of reading this that doesn’t suggest that the fiends in this book are LaVeyan Satanists.

Satanism exists in so many forms, and it’s such a silly concept to begin with, that I’m not going to hold it against an author if they mix it up a bit. The Satan Sleuth series is far more straight forward than Paradise Lost or Goethe’s Faust. In Avallone’s work, Satan and his followers are categorically bad. I’m fine with this. I wasn’t exactly expecting profound philosophical fiction when I bought these books. These are fun adventure stories, and they work as such.

In Paperbacks from Hell, Grady Hendrix writes that “Avallone planned two more Satan Sleuth novels—Vampires Wild and Zombie Depot—but Warner Books never bought them, so he never wrote them.” This is not true. Both Vampires Wild and Zombie Depot were written, but as of today they remain unpublished. David Avallone, Michael’s son, has confirmed that he is working on having the final two Satan Sleuth novels published later on this year. (David also helped me figure out where some of the books mentioned in Fallen Angel came from. Thanks David!) I’ll be reviewing the final entries in the series as shortly after they’re released as possible!