I have spent the last few months obsessing over the infamous Chainsaw Terror, but finding a copy seemed impossible. A few weeks ago, I read a review that made doing so significantly easier. There’s quite a few reviews of this novel online already, but I am far more interested in the story behind this book than the story in it. In this post, I want to present the most comprehensive account of the publishing of Chainsaw Terror/Come the Night to date. 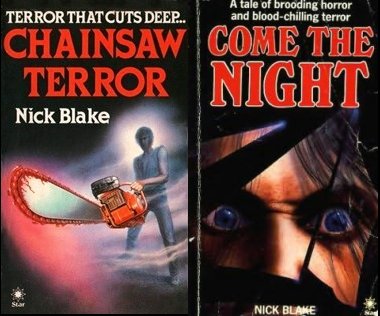 In 1984, Shaun Hutson agreed to write a novelisation of the Texas Chainsaw Massacre. Star, his publishing company failed to get the novelisation rights for the movie, but they encouraged Shaun to write a chainsaw novel anyways. Who doesn’t love a bit of chainsaw violence?

Shaun spent a few weeks (either 15 or 20 days) writing a manuscript titled Chainsaw Terror. A week after sending it in to his publisher, he got a call telling him that parts of it had to be cut out. The extent of these cuts varies depending on Shaun Hutson’s mood. He has claimed it was 20 pages, 25 pages and 30 pages during different interviews.

Apparently Bookwise, the biggest book retailer in England, had banned the book from their stores because of the word ‘chainsaw’ in the title. (By Hutson’s own account, other retailers, including W.H. Smith did not have a problem with the book’s title, but Hutson later claimed that the novel was “banned outright.”) The cut manuscript was retitled and all future copies were published as Come the Night.

Ok, so the small number of copies of the first printing of book that were originally sent to and sold by non-Bookwise vendors were titled Chainsaw Terror, and these are the ones that we see going for 300+ dollars on ebay today. The reason that copies of Chainsaw Terror go for so much money is that the people buying them believe that they include the 20-30 pages that were cut from the original manuscript.

So who is responsible for all of the confusion over the different editions of this book? I’m pretty sure it’s Shaun Hutson. I’ve already pointed to a few instances where he has contradicted himself on elements of  the story, but most confusing of all is the following quote which is currently found on Hutson’s own website:

“…CHAINSAW TERROR and COME THE NIGHT are both the same book. CHAINSAW TERROR was originally published in the US but was banned over here by W.H. Smith because it had ‘chainsaw’ in the title. It was then re-released (heavily cut) as ‘Come The Night’. Actually, make that very heavily cut…”

Ok, so the first sentence and the last sentence of that quote directly contradict each other. Which part are we supposed to believe Shaun? Not only that, but in this quote, Hutson is claiming that it was W.H. Smith that banned the book while he has elsewhere stated that “W.H. Smith who were more conservative in their views [than Bookwise] didn’t have a problem with CHAINSAW TERROR even though they’d later go on to ban my own novel DEADHEAD in 1994.”

According to Hutson, the cuts were demanded just days after he submitted the original manuscript, but while Chainsaw Terror came out in March 1984, Come the Night was only published in December 1985, almost two years later. If Hutson’s claim that “It [Chainsaw Terror] was then re-released (heavily cut) as ‘Come The Night'” was true, this would mean that there are three different versions of the story: the original manuscript, the cut version (Chainsaw Terror) and the cut-cut version (Come the Night). But if Come the Night is a “very heavily cut” re-release of Chainsaw Terror, how is it that every known copy of both books is 173 pages long? Hutson’s claims are full of holes.

I don’t know how deliberate it was, but I can’t help but think that the author has consciously obfuscated the publication details of Chainsaw Terror to add to its infamy. In pointing this out, I want to clarify that I have nothing but respect for Hutson if this is truly the case. Nothing gets my juices flowing better than the mystique of a banned and unattainable horror novel. I’d do the same thing if I was in that position.

I pieced together the above account from different interviews and reviews, and while I’m sure it’s not completely accurate, I think it’s at least the most complete version of the story of the publication of Chainsaw Terror online. (Hutson’s contradictory accounts make it very difficult to suss out who was actually responsible for the title change and where the copies of Chainsaw Terror in circulation were actually sold – was it W.H. Smiths or the United States?) If anyone has any further information on either of these books, I’d be happy to know about it. Shaun Hutson, baby, give me a call and let’s talk.

Just to clarify another point; while paperback versions of Chainsaw Terror and Come the Night are both fairly scarce at this stage, the entire text of Come the Night (and hence Chainsaw Terror) was rereleased as part of a collection of three novels by Hutson that is still widely available. I bought a copy for less than two dollars a few weeks ago. There was also a French edition called La Tronconneuse de l’Horreur put out in 1985. I actually bought a copy of this before I knew that Come the Night was the same as the published version of Chainsaw Terror. I had planned to learn French rather than paying 300 quid for a copy of the English version, but I don’t have to any more. I don’t regret my purchase though, as I think the cover of this version is the single greatest cover art in the history of horror fiction.

I can verify that the text is the same as the English version. It’s cut too. Still though, look at that cover!

Ok, as for the actual plot of Chainsaw Terror… It’s pretty much what you’d expect: an incel cuts up a bunch of prostitutes with a chainsaw. It shames me to say this, but I thought it was quite enjoyable. Everything is pushed a few steps further than is sensible. There’s some nice touches – whenever somebody is cut up, they always seem to shit or piss themselves. Also, the chainsaw maniac has the weird (yet admittedly sensible) habit of taking off all of his clothes before he dismembers his victims.

There is one part of the book where the killer is about to ram a drill into a prostitute’s eyeball where the text cuts off with an ellipsis. When the next paragraph starts, she is dead. I assume this is the scene of one of the infamous cuts. There’s also a tense scene where the killer is left alone with two small children. Nothing happens, but in a later interview, Hutson mentioned that “Killing kids in print is always a tricky area” directly after mentioning the ban on Chainsaw Terror, leading me to believe that the that the killer may have returned to those kids in the original manuscript. Hutson has also mentioned the omission of a scene involving chainsaw rape, but the published versions do actually contain a scene that I thought suggested as much. In truth, none of these omitted scenes would have made a huge difference to the final product. As it stands, the published manuscript is plenty violent and gross. (There are rumours of a pdf copy of the uncut manuscript of Chainsaw Terror that was being sent around the internet years ago, but I doubt we’ll ever see it again.)

In conclusion then, finding a copy of Chainsaw Terror is actually pretty easy despite all the nonsense that has been written about it online. The omnibus containing two other Hutson novels is the way to go my friends – you don’t need to spend 300 dollars. As of today, the 2nd of February 2020, there are more than 50 copies available online for less than 20 dollars, many costing less than half that. The book is enjoyable in a very direct, horrible way too, and I recommend you check it out if you’re at all into violent, mindless horror novels. 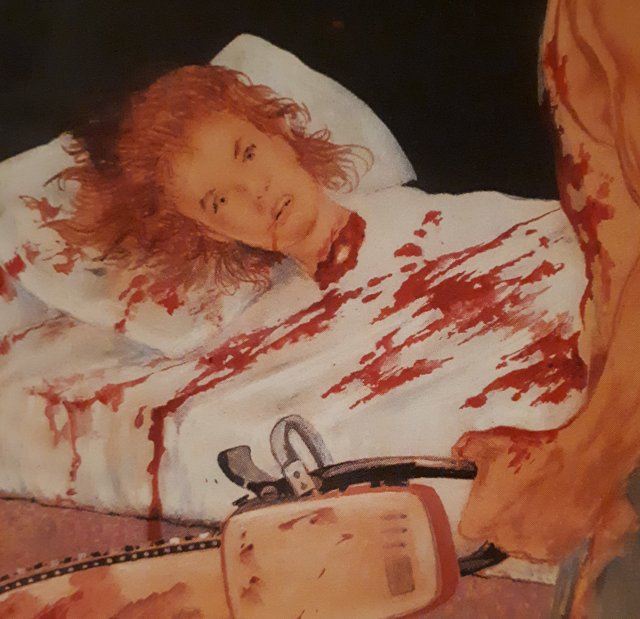 Oh, and if elusive and weird paperback horror is your thing, make sure you check back here soon. I’ll be posting a review of The Voice of the Clown, a real rarity, by the end of the month.