Although this is a post about a book by Clive Barker, I could start it off the exact same way I started my 2016 post on the books of Stephen King, discussing my weekly trips to the local video shop with my parents when I was a kid. The box of one video in the horror section fascinated me. It was called Nightbreed, and there was a picture on the side of the box of a fat, gross goblin-like creature with his face in his chest. Anything featuring this guy had to be a repulsive work of obscene horror. 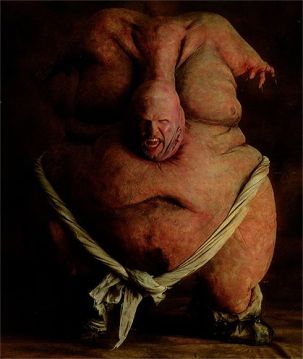 I wanted to see this movie so much.

After getting broadband internet when I was 17, I spent a few years downloading and watching all of those horror movies that had disturbed me in the video shop. I think I was mildly underwhelmed when I got around to Nightbreed. It’s so long ago now, that if you had asked me last week, I wouldn’t have had a clue as to what the movie was about, but I read Cabal, the novel it was based on, at the weekend, and I think some of it came back to me. 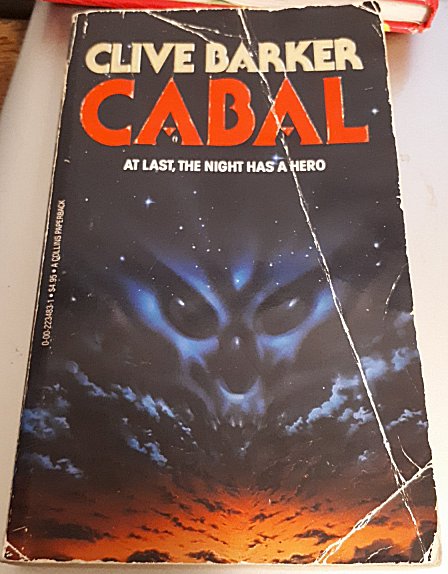 I couldn’t remember the plot of the movie, but I was able to figure out who the bad guy was in the book almost instantly. I can’t be sure that this was my memories of the movie coming back or the fact that it’s kind of obvious. I looked back at the movie poster and trailer there to see if I might want to watch it again, but at 33, it seems considerably less appealing. I know the director’s cut has been released, but I doubt it’s much better. One of the characters still looks like he has the moon for a head. Still though, I’ve been listening to the soundtrack as I write this post, and Danny Elfman’s score is convincing me that the movie might be worth another look.

How about the book though? Well, I want to mention something else before talking about that. I moved apartment recently, and before handing over the keys to my old place, I had to scrub it clean and make it presentable. We had been there for 6 years, so you can imagine how much work that was. I decided to make the work a little easier by distracting my mind with an audiobook. I chose Cabal. I’ve been doing a lot of books on Audible recently, and I have been using the app’s speed-up feature to get through the books quickly.

I did not enjoy this book from the comfort of my armchair. I did not have a pillow against which to rest my weary head as I turned these pages. I did not sip gingerly from a hot cup of peppermint tea as this tale reached its climax. No, no, no. While I was listening to this book being narrated at almost double speed, I was huffing oven-cleaner fumes and shoveling half a decade’s worth of dust and grime from behind a fridge.

Ok, enough of that. You didn’t come here for the banal horror of my life. I included that information to give you some context that might explain my opinions or lack thereof on this book.

Cabal was enjoyable enough. I’ve forgotten a lot of it already. It was pretty violent in parts. I’ve only ever read the Books of Blood before this, and Cabal definitely felt like the same author. There was some religious symbolism or analogy at the end that went over my head. I can’t recommend that you rush out and read this book, but if you’re looking for a weird adventure story to pass the time, you could probably do a lot worse. I bought a paper copy at a library book sale for a quarter years ago. I don’t regret my purchase at all.

My post about The Books of Blood was very short too. I assure you, this is not because I don’t like Clive Barker’s writing. I do. Everything I’ve read by him has been enjoyable. I watched Hellraiser for the first time in years just last week, and I’m already planning another post on the Hellbound Heart and few of Barker’s shorter works in the near future.