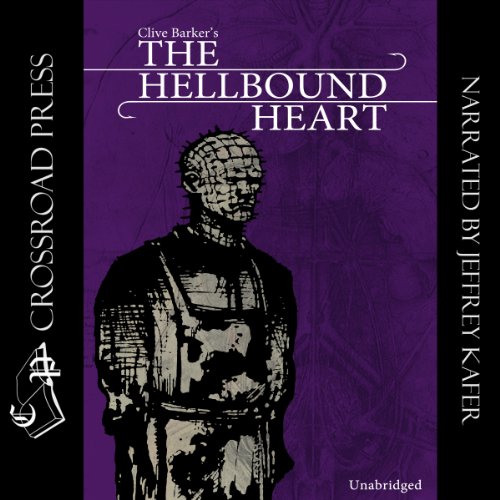 After years of eyeing the video box in my local videoshop after mass on Sundays, I finally saw Hellraiser on the Halloween night after I turned 19. After that much anticipation, I was inevitably a bit underwhelmed. I rewatched it in June this year, and I enjoyed it far more second time around. I had just finished Clive Barker’s Cabal, and I guess I was in a Barkery kinda mood. A few weeks later, over the course of on afternoon, I listened to an audiobook version The Hellbound Heart, the novella that Hellraiser is based on. (Crossroads Press produced two audiobook versions of The Hellbound Heart. One is narrated by Barker himself, but that one is abridged, so I went with the other one.)

In case you don’t know, this is the story of a man who summons a crew of S&M loving demons to his house. (They’re into the bad kind of S&M… the really bad kind.) Things don’t work out very well for this chap and his family. This is a horror classic, and I liked the book quite a lot. I read it so soon after seeing the movie that I was able to pick out their differences.

The main change is that Kirsty is Rory’s friend in the book whereas she is his daughter in the movie. I think the story works better when she’s his daughter. It’s harder to imagine the characters’ motivations when these two are just friends.

In the book, the Cenobytes are less threatening or maybe just a little more distracted than in the movie. When they first appear, they try to make sure Frank knows what he’s getting himself into before they work their magic on him. This is a bit confusing as when Kirsty summons them later on, they tell her that they can’t leave without taking the person who summoned them. Why does Frank get a chance to back out but Kirsty doesn’t?

In the book, the female cenobyte seems to be more of a group leader than Pinhead. She’s the engineer in the book, but that title goes to the weird wall monster in the film. Oh, and there’s no pet store or tramp in the book. Aside from these few differences, the book and movie are pretty much the same. If, like me, you enjoyed the movie, give the book a go. It’s fun to do both.

This is the third of Barker’s works to appear on this site in 2020. The Hellbound Heart (1986) came out right after the Books of Blood (1984 – 1985), and aside from it being slightly longer, it wouldn’t feel out of place with the tales in those collections. (I saw recently that there’s a Books of Blood TV series coming out in October.) I definitely liked The Hellbound Heart better than Cabal (1988) as it’s more horror than fantasy. I reckon I’ll read Barker’s The Damnation Game (1985) next.

One thought on “Clive Barker’s The Hellbound Heart”