I love books about witchcraft and demonology. I also love books from/about Ireland. I’m sure you can imagine my excitement on finding this little beauty. I actually read the book online, but managed to pick up a copy online for a reasonable price.

This edition is lovely. It’s a nice hardback, with lovely typeset and a very interesting cover. The image on the cover is from a painting by Richard Dadd called “The Fairy Feller’s Master-Stroke”. It’s not particularly Irish or witchy, but it’s cool all the same. Look it up on google there and have a gander. I really like it.

The contents of this book are pretty good too. Unlike a lot of European countries, Ireland never really had much of a problem with witches. It’s hard to know whether that was due to the fact that’s it’s an island and hence relatively isolated, or whether it was because the country had enough problems with the bleedin’ Brits during the witchcraze and didn’t have time to be getting upset over such silly nonsense. It could also be that the deeply superstitious Irish peasantry had been holding on to some ancient pagan traditions, and had never come to see witchcraft as an inherently negative thing. It was very probably due to these and a combination of other reasons that Ireland wasn’t much affected by the witchcraze of the middle ages.

Some parts in this book are great. I really liked the part on Alice Kyteler. TG4 did a great documentary on her that’s up on youtube. The house she lived in is now an inn, and I swear that the next time I’m in Ireland, I’m going to try to pay it a visit.

There’s a few aul stories in here about fairies and lads cheating the divil and that kind of craic. I enjoy reading that stuff immensely, but this might not be the book for you if you’re looking for pure, nasty witchcraft. That said, there are some grim incidents recounted in here. There’s one story about a woman who goes mad and kills her elderly neighbour:

One of the witnesses deposed that he met the accused on the road on the morning of the murder. She had a statue in her hand, and repeated three times: “I have the old witch killed: I got power from the Blessed Virgin to kill her. She came to me at 3 o’clock yesterday, and told me to kill her, or I would be plagued with rats and mice.”

The most chilling thing about that story is that it’s actually from 1911.

Overall, this is an enjoyable little book. A lot of it’s taken up with folktales that seem unlikely to have had any basis in truth, but there are a few sinister and curious accounts of what were doubtlessly real events. Seymour isn’t out to scare anyone and definitely comes across as critical of the witch craze. (Montague Summers, he is not.) Irish Witchcraft and Demonology is a decent attempt to compile the history of witchcraft in an almost witch-less country. It’s short, interesting and definitely worth a read. 8/10

Getting back to the cover illustration, check this lad out! 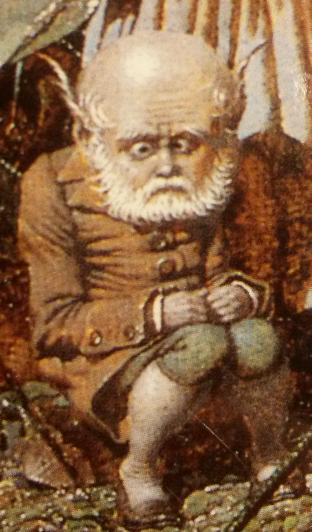