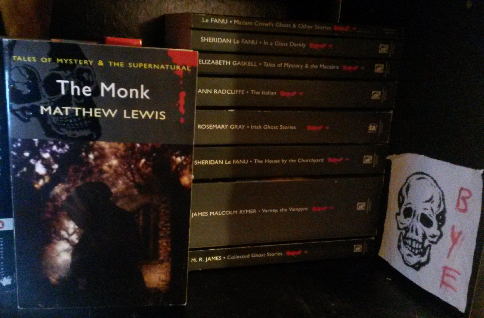 I enjoy collecting books, but I’m not in a position to buy nice editions of every book that I want. If the price difference isn’t huge, I’ll go with the hardback edition, but with some books, particularly science fiction, I actually prefer mass-market paperback editions.

I have a particular fondness for ghost stories and gothic horror, and I have hence amounted a small collection of the Wordsworth series of ‘Tales of Mystery and Supernatural Horror’. These books are usually less than $5, and although they aren’t usually annotated as nicely as Penguin or Oxford editions, they do the trick. My biggest gripe with this series is the pathetic cover art on some of the books, especially this one and Collected Ghost Stories by M. R. James. Yes, there are cool blood splotches and shiny 3D skulls, but the actual cover images are horribly pixelated; they look like they were thrown together in mspaint.

Anyways, this is one of my favourite books. I love it. There’s plenty of poems and subplots to keep it interesting, along with lots of juicy boldness: bitta shaggin’, a dirty aul priest, the divil floatin’ about…fuckin’ savage. The Bleeding Nun is also very cool. I don’t want to ruin anything on you if you haven’t read the book, but I’ll just admit that I was genuinely surprised when I got to the scene where Matilda unveils herself. I can’t even remember if she was supposed to be good looking or not, but that whole scenario of her in the monastery got me… excited. This book was written by a 19 year old male, and there is definitely an undercurrent of misguided horniess throughout. Apparently the Marquis De Sade was a fan; there’s definitely parts in here that that old gentleman would enjoy.

I won’t talk about this one too much though; there’s a million other reviews of this one online. The book itself is a classic, and if you’re at all interested in gothic horror, you have to read this. 9/10

The 2011 film version with Vincent Cassel is pretty good. It’s definitely worth a watch if you enjoyed the book.

(A parody of The Monk was published in 1798. It’s ingeniously titled ‘The New Monk‘, and apparently it’s even bolder than Lewis’s work. Valancourt have an edition out at the moment that I’ve been thinking about buying. They also have a nice looking edition of the original, with an introduction from Stephen King.)

One thought on “The Monk – Matthew Lewis”