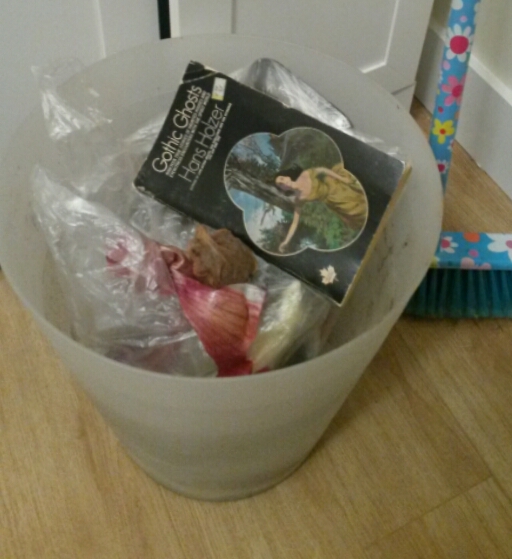 This book is absolutely terrible. It’s a collection of about 20 ghost stories, all of which are supposedly true. There are no sources given, and all of the stories follow the same formula. The following could be substituted for any of the included accounts:

Marjory, an art student, always knew that she had occult powers, but she never realized the full extent of her ESP until she moved into the old house on Pooey Street.

Number 15, Pooey street was a Victorian mansion. It was beautiful on the outside and luxurious on the inside, but there was a catch! Upon entering the mansion, any individual possessing any variety of paranormal sensitivity would feel a rumbling in their guts and immediately thereafter, they would void the soupy contents of their bowels into their britches.

Marjory was able to adapt to this sticky state of affairs by constantly wearing an adult diaper. The house was cheap and spacious, and Marjory was a poor student in desperate need of a studio for her art. A smelly bum and a dose of nappy-rash was a small price to pay for such a perfect home. Marjory soon adapted to life in the old house, and things seemed to be going swimmingly for her. That was until she saw the figure on the stairs!

One night, she awoke from her slumber and arose to fetch a glass of water from the kitchen. She drearily walked out of the bedroom and turned to walk down the hall. There, on the stairs in front of her, floated a ghastly specter! A full body it was not; only a repulsive, mouthless face that stared menacingly at Marjory who was now frozen stiff at the top of the steps. The face had two hairy cheeks and a singular brown eye that seemed to be winking horribly at Marjory. Marjory wondered if it was the ghost of a cyclops who had died of conjunctivitis and mumps, as the gaping eye was smeared with a rotten brown crust and the cheeks were rotund and fleshy. A small trunk-like appendage arose from under the eye and sprayed Marjory with a rancid milky ectoplasm. That was when Marjory fainted and fell down the stairs.

She awoke in the hospital days later. She had suffered severe brain damage and was never able to walk again. It just goes to show that an old ghost never learns new tricks!

Obviously I got a bit carried away when writing that. If the book was full of stories of that caliber, I’d be giving it a solid 10/10. No, this book is nowhere near entertaining. It’s basically the same stupid story of a dead scullery maid looking for attention, told twenty times over.

I can’t remember how this piece of trash found its way into my book collection. I either picked it up at a library sale for 50 cents, or perhaps the ‘Gothic Ghost’ of Hans Holzer planted it in my collection in order to have it reviewed. Sorry Hans, this is fucking terrible. I’m giving your shitty book a 1/10.