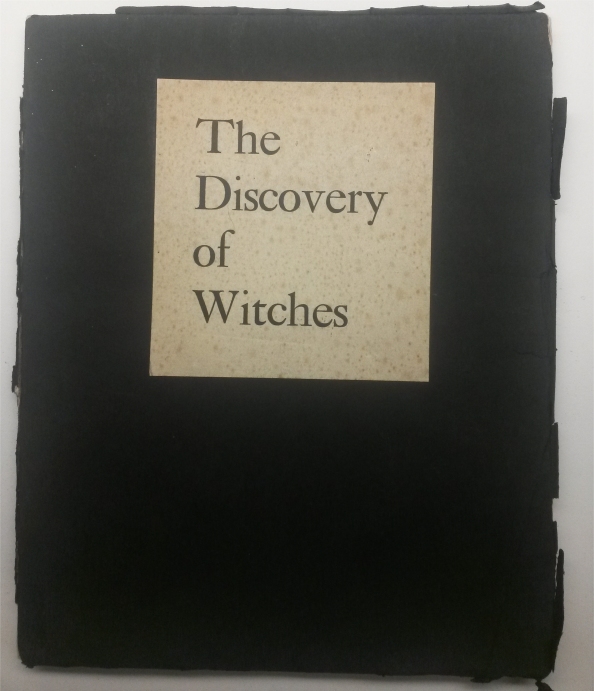 This is a cool one.  This pamphlet contains Matthew Hopkin’s treatise on witchcraft from 1647 and an essay about Hopkins by my hero, Montague Summers. Hopkins, for those of you who don’t know, was England’s self proclaimed Witchfinder General. From 1644 until 1647, he traveled from village to village, trying and torturing those unfortunates accused of witchcraft. England was going through a civil war, and the state of political turmoil made it possible for Hopkins to assume authority and roam about as he pleased, burning bitches and getting money. It is believed that he was responsible for the deaths of 300 people. (This works out at as more than half of the total number of witches killed in England from 1400-1700.) The story goes that he stole the Devil’s list of names from Lucifer himself, and that’s how he knew where to look and who to interrogate. There was a movie made about him in 1968 that featured Vincent Price in the title role, and many heavy metal bands have written songs about him. I think he was a pretty neat guy.

The essay is fairly interesting. Summers gets upset over the fact that people presume that burning at the stake was the standard method by which witches were executed in England. Although many witches were burned alive in Scotland and on the continent, most English witches were actually hung. Those few that were burned were usually being burned for other, additional offences. Summers deems Hopkins a humbug, a quack and a mountebank largely on the basis that Hopkins was not familiar with the classic literary works on witchcraft. The fact that he claimed to be an authority without having first poring over the literature really seemed to grate on Monty. (Summers was enormously erudite and is responsible for many of the existent translations of these works with which Hopkins was not acquainted.)

(Image From Robbins’ Encyclopedia of Witchcraft and Demonology)

Hopkins’ pamphlet takes the form of a dialogue between himself and a person who is not convinced of the legitimacy of his work. He explains how he began his witch hunt, the nature of witchcraft and the different methods of ‘examining’ a witch. These different forms of examination were really just different varieties of sadistic torture. Hopkins was a notorious witch-pricker. He and his accomplices, John Stearne and Goody Phillips, would spend hours sticking needles into women’s flesh. If they found a spot that would not bleed, this was taken as proof of diabolic interference. (The Devil always left his mark somewhere on his servants’ bodies, and the spot where he left this mark would not shed blood.) The only real problem with this method is that there is a finite amount of blood inside a human body, and the more pricks you give a person, the more likely the next prick will prove bloodless. In fairness to Hopkins though, pricking was only a preliminary method of testing. If the results weren’t conclusive, the witch would be ducked.

Remember that amazing scene in Monty Python and the Holy Grail in which the crowd decide to throw an alleged witch into the pond to see if she floats? (Watch it again and notice how they inaccurately claim that witches should be burned!) Well, a good game of sinky-floaty was also a favourite pass-time of Hopkins. 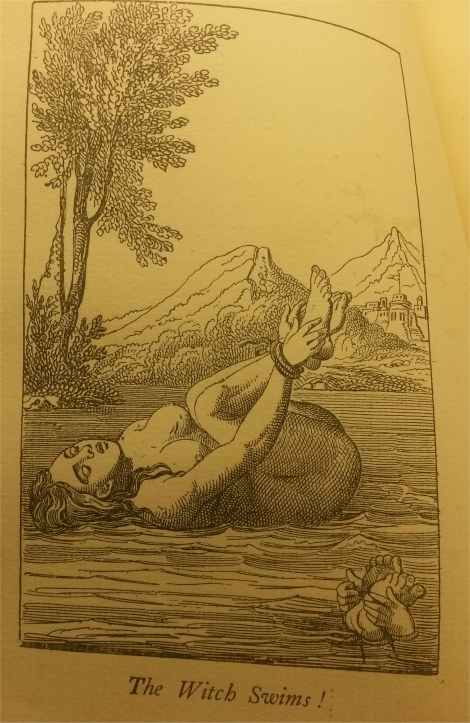 I’d allow her to swim in my pond any day.

Summers describes how before the witches would be thrown into the pond, they would have their thumbs tied to the feet on the opposite sides of their body so that their limbs would be making the sign of the cross. The reason that witches were dunked in this manner was not to see whether or not they were made of wood; it was because water, which is in some way divine by its nature, would not accept a servant of Satan into its bosom. This method of trying a witch always seemed particularly bizarre to me, but apparently the practice of dunking occurred in some parts of Europe up until the late 19th century.

Can you think of anyone else who floated on water though? Hmmmmmmmm? I wonder what his excuse was…

Other suspected witches were either ‘watched’ or ‘walked’. Watching a witch involved placing the crone in a room with a small chink or hole in the door until she either made a confession or something else occurred to prove her guilt. She would be forced to sit in an awkward position, and tied up if she refused to remain still. The watchers would keep an eye out for spiders or small flies that slipped into the room through the fissure in the door. If they were unable to squash these bugs, this would be taken as proof that they were actually the accused’s familiar spirits come to relieve their master in her hour of suffering. An elusive midge could provide interrogators with enough evidence to send a witch to the tree. Watching sessions could last days, and the witches were starved throughout.

‘Walking’ was when witches were deprived of sleep and energy by being forced to stay up all night, running back and forth in a small room. Ándale, ándale! Arriba, arriba! 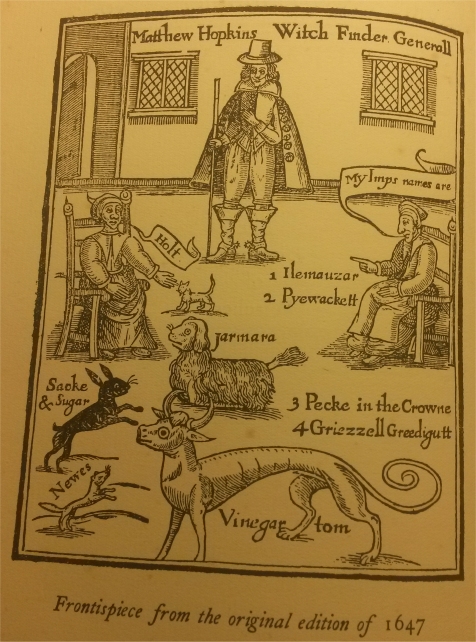 Hopkins also provides an entertaining list of the names of all the witches’ familiars that he encountered. He claims that these wicked spirits have “names which no mortall could invent”, and while Ilemauzar, Pyewackett, Jarmara, Jeso, Holt, Saoke, Griezzel, Wynoe, Panu, and Mrit are all quite unusual sounding, Pecke in the Crowne, Vinegar-Tom, Jockey, Sugar, Newes, Littleman, Prettyman, Dainty, and  Greedigut all sound very much like they were invented by a mortall, and that’s not to mention Elizabeth, Collyn and Sandy. Best of all though, one witch claimed her familiar was named Jesus. (Summers gets hot and bothered over this, claiming that “to name the Sanctissimum Nomen would be to banish the familiars and dissolve the enchantment.”)

After a few years, local authorities became suspicious of Hopkins, and he was forced into early retirement. There are stories that he himself was ducked, but there is no evidence to believe that this actually  happened. He died from tuberculosis in his late 20s. (Vincent Price was 56 when he played him in the movie.)

This book is fairly old. I had been keeping an eye out for an affordable copy for quite a while before I found this one, and all things considered, it’s in pretty good condition for what I paid for it. The cover and spine are in rough shape, the pages are yellowed and the edges worn, but I’ve been able to figure out that before I purchased this copy, it had probably remained unread since its publication. Several of the pages are bound together on the wrong side, making the book impossible to read without either tearing them apart or using a very small camera to slip between the pages to photograph them. Maybe there is a specific word for this kind of printing error, but I am unaware of it. Check out the video below to see exactly what I mean.

I read Hopkin’s pamphlet online a long time ago, and Summer’s essay is interesting but not exactly mind-blowing. As a whole though, this book is fucking cool, and the extra effort I had to put into reading it made it all the more enjoyable. It’s Walpurgisnacht tonight too, so turn the tables on Hopkins and make it your business to go forth, make love to the devil, ride to the Sabbath, and hang a witch-hunter.