It’s been a while since I reviewed any Evangelical christian bullshit. While books of this ilk are always terrible and often palpably irritating, they are a necessary evil. The frustration that they cause serves to replenish my patience for awful, left-hand-path books about Black Magic and Satanism. The ol’ devil worship seems violently appealing when compared with this kind of idiotic christian foolishness.

Holy Jesus, this one is particularly bad too. I actually ordered it online last October, but it arrived 2 days into November, so I postponed reading it for the year. It was not worth the wait. I’m going to briefly go through the chapters, just so you can get a taste of how truly moronic this pile of shitty-shitey-farty-bummy-pooey-poo this is.

Chapter 1. The argument here is that fear is not of God; therefore, anything that causes fear intentionally (horror movies, scary costumes, etc…) is not appropriate for a christian. In fact, watching horror movies or dressing up in a costume will probably lead you into practicing witchcraft. I thought that this idea of fear being completely removed from god was fairly interesting.

Chapter 2 describes the origins and traditions of Halloween. This section was a bit confusing. The text is describing ancient Celtic practices, but the accompanying images are from Disney and Hammer Horror films. There’s no distinction made between historical fact and legend. I’m sure some of what’s written in here is true, but the information is so poorly presented that it would be futile to attempt to distinguish the fact from the fiction. This issue is apparent throughout the book, and it serves to clarify that the only people who could read this book and take it seriously would be individuals completely incapable of critical thought.

Many of the images in this seriously shitty book were simply lifted from Richard Cavendish’s Man, Myth and Magic magazine series. I have a few copies of the magazine on my shelf, but I recently found that a nearby college library has the entire collection. I think I might have to spend a few days in there soon doing so some copying.

Chapter 3 talks about some animals and supernatural entities that have been linked with Halloween. It doesn’t really pass much judgement on them though. Again, the information here is a weird mix of general knowledge, opinion and fiction. This chapter, like many of the following, doesn’t really support the author’s idea that Halloween is Satanic at all. One of the images here is the cover page of a reprint of Varney the Vampire.

Varney the Vampire is a serialized novel originally published from 1845-1847. It’s a fairly well known piece of literature, and will definitely have come to the attention of anyone who has done any research on vampires. The authors of Halloween and Satanism have taken the cover page of this famous work and given it the heading “Vampire Show Advertisement”. But a book is not the same thing as show, and a title page is not the same thing as an advertisement. This is not a case of me disagreeing with the authors; this is a case of the authors publishing false information. But wait… this isn’t the worst of this variety of mistake to appear in this book. This doesn’t even come close to what pops up in chapter 7…

At the end of chapter 3, the authors suggest that their readers should celebrate “Holy-ween” instead of Halloween. This would entail prayer and dressing up as one’s favourite Bible character. Whoever made this suggestion would doubtlessly go as THE VIRGIN.

Chapter 5 is just a bunch of Biblical references chosen to support the notion that witchcraft is bad.

Chapter 6 is an awful summary of the history of witchcraft. The complete disregard for separating truth from speculation and opinion renders this fairly difficult to bother analyzing. Anyone with the patience to read a serious critique of this book would never have been capable of taking this rubbish seriously. It’s genuinely appallingly written. There’s a great bit in here about witches’ familiars, the demon-animals that witches use as servants. The authors claim that witches familiars never take the form of fish because fish are linked with christ. I would have thought that this had more to do with the fact that a fish is going to be far less useful as a servant to a human due to the fact that it lives in water. There’s very little mention of Halloween in this chapter.

Chapter 7 discusses the history of black magic and the black Mass. Again, this is awful rubbish and doesn’t really add any weight to the authors’ argument that Halloween is satanic. There’s a fairly lengthy description of a witch being tortured in this chapter that doesn’t serve any function other than sensationalizing the topic. This is objectively terrible writing.

Also included in this chapter is perhaps the most offensive part of the book.

This image of an evil looking man, titled “Satanic Symbol” is thrown in the middle of a section about the Black Mass. This “Satanic Symbol” is actually the movie poster for Der ewige Jude, a repulsively anti-Semitic 1940 film produced for Joseph Goebbels, Nazi Germany’s Minister for Propaganda. The title is still on the poster too. How the fuck did nobody notice this? Either Joan Hake Robie and Phil Phillips didn’t give a fuck about what they put in their book, or they deliberately used an image that the Nazis used in their attempts to dehumanize Jews. Either way, this is a shameful mistake to have made. I’m not easily offended, but when you sit down and think about what’s happened here, it is actually disgusting. They have literally used one of the vilest and sadly, most effective pieces of Nazi propaganda to push their moronic agenda. What a fucking disgrace. They really should be ashamed of themselves.

At this stage, I was getting a bit fed up with this book. The next chapter discusses modern day witchcraft and magic. Nothing of note here.

Chapter 9 gives some satanic terminology and rituals. It actually contains large chunks of text from LaVey’s Satanic Rituals. I wonder if they were given by permission by the Church of Satan… Also included here is a warning to parents to look out for Motley Crue or “Ozzie” Osbourne records in their children’s rooms.

Chapter 10 is weird. It gives accounts of people who played with the occult and suffered because of it. One of them ends up getting attacked by a werewolf Jesus. Utterly stupid.

Chapter 11 is comprised of different news stories. There is mention of the cancellation of a Mercyful Fate concert in Norfolk, Virginia. That must have sucked for Norfolk. I checked it out, and that show was indeed cancelled (although King Diamond played a set in the same venue 4 years later). The rest of these news stories are about kids turning satanic after playing with Ouija boards.

The last 3 chapters wage war on Satan without being very clear on how to achieve victory. There’s some cringey sections in which the authors quote their favourite get-rich-quick, motivational speakers. Unsurprisingly. there’s no brilliant conclusion to tie up all the loose ends into a coherent argument against Halloween.

This is a “picture” of the “authors”.

I think that an intelligent person could very easily write a book about why Christians should reconsider how they celebrate Halloween, but I also doubt that any intelligent person would waste their time doing so.  Halloween and Satanism was clearly not written for intelligent people. This is sensational, incoherent garbage that only the most dangerously stupid idiot could take seriously. It’s misleading, it’s untrue and it’s legitimately offensive. Fuck this shitty book.

My life is extremely busy at the moment, and I actually wrote this review in September to make sure it would be ready for Halloween. In the meantime, I did a little internet sleuthing to see if I could track down either of the authors. I found Phil Phillips’ twitter account, and to my surprise, he seems to have dedicated a lot of his time to helping people, especially kids, in parts of Africa and Asia. He is a Trump supporter (no surprises there), but the guy is definitely not an out-and-out racist. I’d be willing to bet that the Nazi imagery included his book wasn’t included with the intent to sow the seeds of the fourth reich. With this in mind, I reached out to Phil and asked him for an interview.

These are the only messages I sent. Friendly and polite, no?

Now look, I know that I’ve written some nasty things about books and authors, but I’m not a complete piece of shit. If a person is willing to take the time to talk to me, I’ll be respectful, friendly and polite, regardless of our differences. The reason I wanted to interview Phil Phillips was the fact that I hated his book but thought I saw goodness in him. I hoped to use that goodness as a bridge between our differences so that we could better come to understand each other’s point of view. It was not to be.

I thought this was a bit of an over-reaction to be honest. I wanted to give the guy a chance to respond to my criticism of his work. As things stand, I can only presume that he’s aware of the shortcomings of his terrible book and doesn’t want to embarrass himself further by talking about it. Fair enough Phil, but you didn’t have to block me. I wasn’t remotely unpleasant to you.

Ok, all that being said, the big day is almost here. I’ve already carved my pumpkin and filled my phone with Misfits and Type O Negative albums. This is going to be my first Halloween as a dad too, and I’m going to initiate my baby girl into the cult of Satan by dressing her up as a cute little witch and taking her to the trick-or-treat party in our apartment building.

I encourage you all to watch scary movies, listen to heavy metal and worship at the altar of Satan this Halloween. Keep it spooky and have a good one! 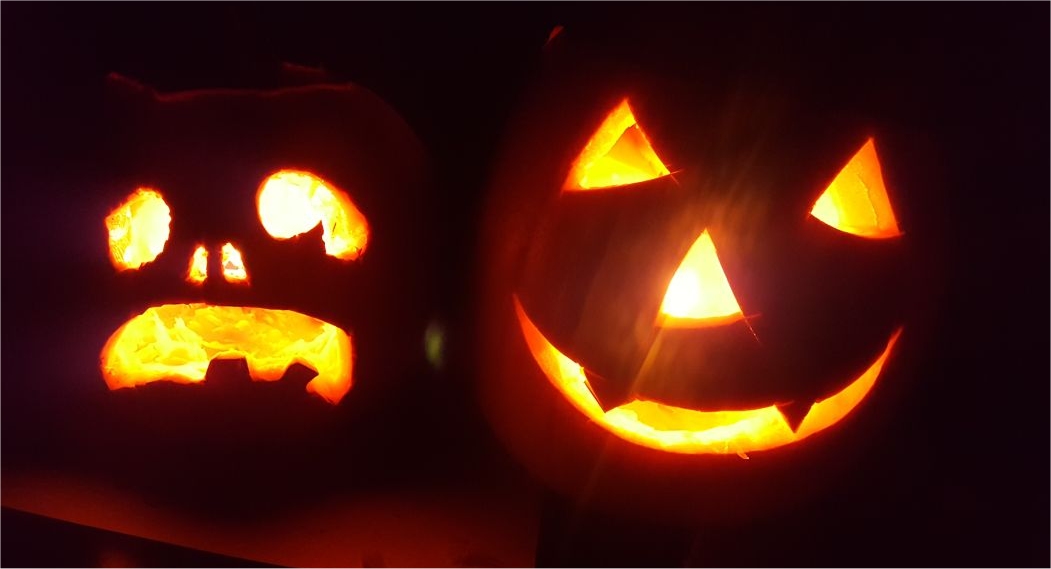 4 thoughts on “Halloween and Satanism”