Twisted – Sue Hollister Barr
BMI – 1992
Twisted is, perhaps, the worst novel I have ever read. It is boring, disjointed, stupid and pointless. In an interview, the author herself referred to this novel as a “fucking piece of shit” and admitted that it’s padded with “formless, utterly embarrassing mush.”

This is a book about a group of hippies who find themselves travelling across America in a van together. On their voyage, they realise that they were all family members in a past life. The Carnes, the family they belonged to, were particularly dysfunctional, so dysfunctional, in fact, that their issues start to bleed into their next lives.

Here are the problems with this book:

I actually feel a bit bad about this review. I don’t have any qualms about attacking the work of non-fiction authors because non-fiction should be able to withstand attacks, but attacking the product of another person’s creativity (that is being presented as such) feels a bit mean, and as far as I can remember, this is the first time I’ve really done so on this blog. Then again, this book was so bad that I feel that I would be doing the world a disservice by not expressing how terrible it is. The fact that the author has also admitted that the book is awful makes me feel a little better. As a matter of fact, she was so unhappy with it that she actually self published a new, apparently much-improved, edition of the book a few years ago. I definitely won’t be checking it out, but it probably is better than the edition I read. The edition that I have comes from BMI books, a scam company that was apparently created so that the publishing house could get out of paying the authors any royalties, so if for some reason you were curious about reading Twisted, I would suggest buying the new edition. 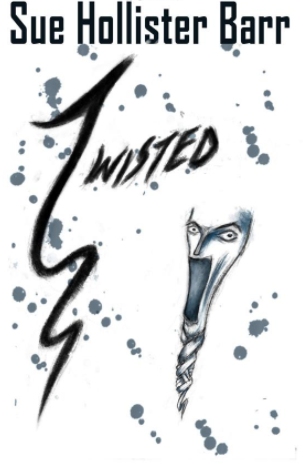 The new edition also has a much improved cover; the angry green face on the original edition has transformed into a surprised shoelace. Priceless.