Picture this:
You enjoyed last night’s chili so much that you had two large bowls. Now it’s the morning after and you’re straddling the toilet, aware that an eruption of Vesuvian proportions is imminent. Whooosh! The intensity of the shitflow is equal parts relieving and violent – it takes about 6 seconds for your anus to dispel what took you 20 minutes to eat only hours earlier.

Now imagine a gigantic ass shitting with that intensity for a prolonged period of time. Somehow the being this ass belongs to has an infinite reservoir of rancid, hot, soupy crap feeding the flow of their disgustingly stretched and overworked anus. Their high pressure fountain of fluid feces is pointed directly at your mouth. Try as you might to avoid them, the diarrheic rapids find their way into your maw, rebounding against the back of your throat and sending squirts of wet shit out each of your nostrils. You are drowning in dysentery, yet you remain alive.

Breakthrough (The Next Step) – Whitley Strieber
Harper Collins – 1995
I reviewed the second entry in Strieber’s visitors series only 3 months after reviewing the first, but it took me almost 2 and a half years to pluck up the courage to move on to Breakthrough, the 3rd entry in the series. By no means did I think that Communion was a good book, but Transformation was definitely worse, and I knew that any further forays into Strieber’s silly nonsense would prove to be absolutely terrible. I was right.

This book really is difficult to read. Strieber included his most interesting abduction experiences in Communion, and Breakthrough is just the continued coming to terms with having had aliens probe his rotten shitbag that Whitley started in Transformation. There’s very little alien activity being described in here; it’s nearly all speculation on the nature of the relationship that Strieber thinks the aliens want to have with us. He thinks they want to open our eyes to new levels of consciousness and understanding. This is getting closer and closer to that new-agey garbage in books like You Are Becoming a Galactic Human.

Highlights of this book included the description of the smelly goblin that lived in Strieber’s house for a month, Strieber’s astral voyage to the literal Garden of Eden, and the sin spiders that appeared above his bed. I really doubt that Strieber believes his own bullshit. These are just bad dreams he had or ideas he came up with on the toilet. At one stage he describes an experience in which he and a friend drive through an alternate dimension, an idea that I am certain he plagiarized from Mrs. Todd’s Shortcut, a short story by Stephen King. (If you’re interested in this comparison, the incident occurs in Chapter 11, page 139 in my edition, and King’s story is in Skeleton Crew.) Strieber puts little effort or care into making his story believable because his audience is mostly made up of low-grade-imbeciles.

All in all, this is a remarkably atrocious book. 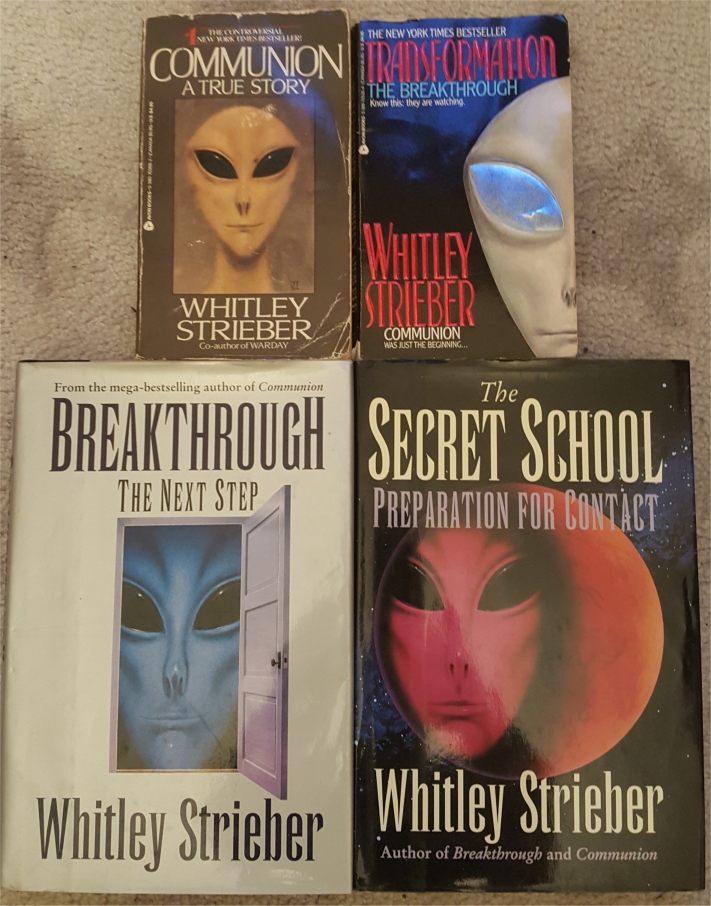 I have The Secret School, the 4th book in Strieber’s visitors series, but after this, I don’t know if I’ll ever read it. This series is terrible, awful rubbish.