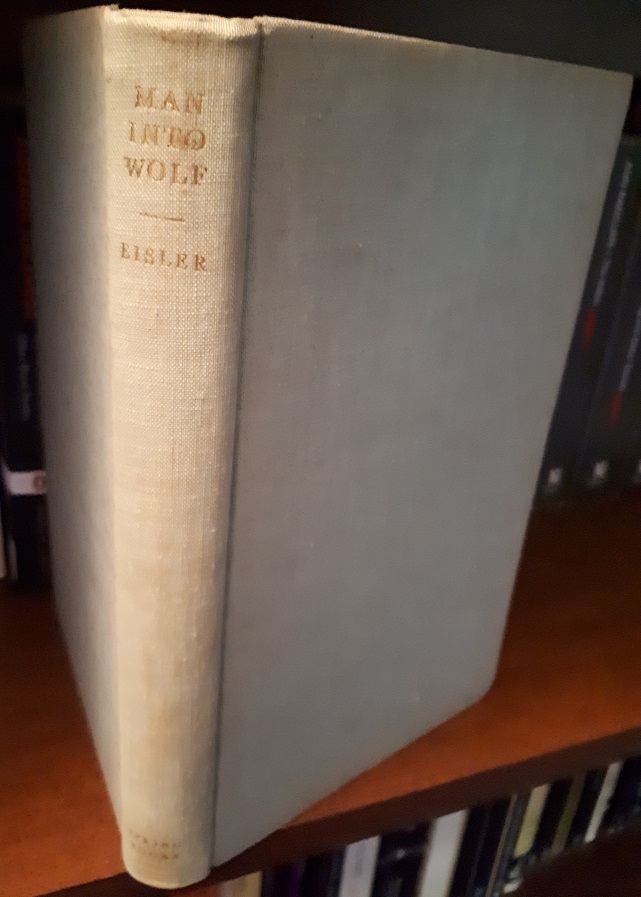 While this book may not look as interesting as the stuff I reviewed in last week’s post, it is more original, more suited to this blog and infinitely more interesting. Don’t let that pale blue cover fool you; this is mental.

The collective unconsciousness, as far as I understand it, is a postulated pool of ancestral memories to which each human being has limited access.  This theory is supposed to explain some of the strange ways in which we act. For example, it suggests that modern humans are afraid of the dark because a part of our unconscious mind remembers our distant ancestors being attacked by wild animals in the dark of night. I see the reasoning behind the idea, but I think it’s mostly understood to be pseudoscience at this stage.

Why the discussion of outdated psychology? Well, the theory of the collective unconsciousness is central to the claims of Man into Wolf by Robert Eisler, a 1948 lecture that was turned into a book. I can’t remember where I first read about this strange text, but I remember spending a lot of time tracking down an affordable copy. (This was during the stage of my life when I preferred physical books to digital copies.) Once I found a copy, it lay on my shelf for 5 years.

Eisler claims that human beings originally lived in a Rousseauian state of harmony. Our primitive ancestors were pygmys that lived in small tribes, eating only fruits and vegetables, having sex with everyone and generally having a great time.

Unfortunately, these peaceful tribes were very vulnerable to attacks from predators, and early humans were often attacked and killed by wolves and lions. Eisler claims that in order to defend themselves from these attacks, the primitive humans started to emulate the behavior of the wolves. They started wearing wolf skins and began to eat meat themselves. This is where things started to go wrong for us. This was the real fall from grace behind the Genesis story. Once we developed a taste for blood, when we became wolf men, we started attacking other tribes and stealing their women. We thus created war and expelled ourselves from the garden of Eden.

As naive as this theory sounds, parts of it are true. The diets of large apes are largely vegetarian, and early humans were the same. Ancient hunters and warriors from around the world also wore the skins of wolves in an attempt to harness their predatory powers. Despite the inclusion of these historical truths, Eisler’s narrative remains unconvincing.

He claims that our ancestor’s change of diet and wolf skin clothes are to blame for recent acts of sadism, masochism and lycanthropy. The sadist and lycanthrope are responding to the desires of the wolf man that remain in our collective unconscious. By whipping or eating their sex partner, they are responding to the desire to inflict suffering on their peaceful vegetarian ancestors.

The masochist harbours, at a deep unconscious level, the memories of the peaceful pygmies who looked on as the savage wolf-skin clad warriors invaded their territory and raped and kidnapped any viable mates. While they may fear the sadist’s brutality, they are also drawn to it. They know that they may win approval if they submit to the wolfman’s every desire. It’s no coincidence that the most famous work of masochism is titled Venus in Furs!

Eisler concludes this work with a call to return to the peaceful ways of our ancestors. He claims that if men had always been murderous savages, we would have no chance for redemption, but since our ancient ancestors were peace loving monkey-men that changed only due to extreme conditions, we can, through massive social change, return to our former state of harmony.

The central idea of this lecture is utterly ridiculous. Fortunately the text of the lecture makes up only a small portion of this book. The rest consists of detailed notes and appendices. After perusing these, the reader will be forced to admit that while Eisler’s argument is unconvincing, his book was at least well researched. While I’m not sure that I’ll ever read the lecture again, I will be keeping this book for the information it contains on De Sade, Masoch, mass murderers, ancient blood rituals, perverts and werewolves.

2 thoughts on “Man Into Wolf: An Anthropological Interpretation of Sadism, Masochism and Lycanthropy – Robert Eisler”