The Voice of the Clown – Brenda Brown Canary
Avon Books – 1982

After Paperbacks from Hell came out, quite a few of the books featured therein became hard to find. I made a list of the ones that I needed to read (most of which included the word Satan in the title) and tried to forget about the rest. After a bit of hunting, I managed to get my hands on copies of all of my first picks. I ordered some online, found others in thrift stores, and downloaded pdfs of others. Now, two years later,  I have read and reviewed 20 of the books featured in Paperbacks in Hell. Some were really good (The Cipher, The Tribe), and others were truly terrible (Brotherkind, The Manse).

At this stage, the demand for many of these novels has diminished slightly, and books that were 300 hundred dollars are now available for 50 or 60. I check other blogs and discuss books with other nerds on twitter, and I noticed that the ‘paperback from Hell’ that is most frequently mentioned because of its scarcity is Brenda Brown Canary’s The Voice of the Clown.

This title had escaped my notice when I first read Paperbacks from Hell, but I googled it after seeing it mentioned a few times and discovered the reason for its scarcity. Grady Hendrix has apparently claimed that this is the one book that actually lived up to the ‘from Hell’ title and that it is the only book to ever make his jaw drop. I was enticed, but after seeing the prices that it goes for online, I decided not to get too interested as I would never pay that much for a book.

A few weeks ago, I went to one of my favourite local bookshops. It’s super cheap, and has the biggest selection of paperbacks in my city, but it’s entirely disorganized, and over the course of several visits, I’ve cleaned out most of the horror novels. This time, I spent a good half hour without finding anything, but I didn’t want to walk by the owner of the shop without buying anything, so I continued my search. Then I discovered a copy of T.E.D. Klein’s The Ceremonies, a book I’ve wanted to read for a while, and with renewed vigour I turned to a bookcase that I hadn’t yet searched through. There are three rows of paperbacks on every shelf, and it was at the back row of the bottom shelf that I found a copy of The Voice of the Clown with 2.00 written on the cover.

I started to shake. This was the Holy Grail of collectible horror paperbacks. I grabbed another horror novel and sandwiched the Clown between that and The Ceremonies to make it less conspicuous. I had to get out of there before another collector saw what I had and a fight broke out. Like a thief in the night, I tiptoed to the counter, put my books down and smiled at the old lady. I assumed that she was going to recognise what I had in my hand, but she just smiled back and charged me 9 dollars for the three novels. I got out of there as quickly as I could, expecting to hear sirens behind me once somebody realised the daylight robbery I had just committed. 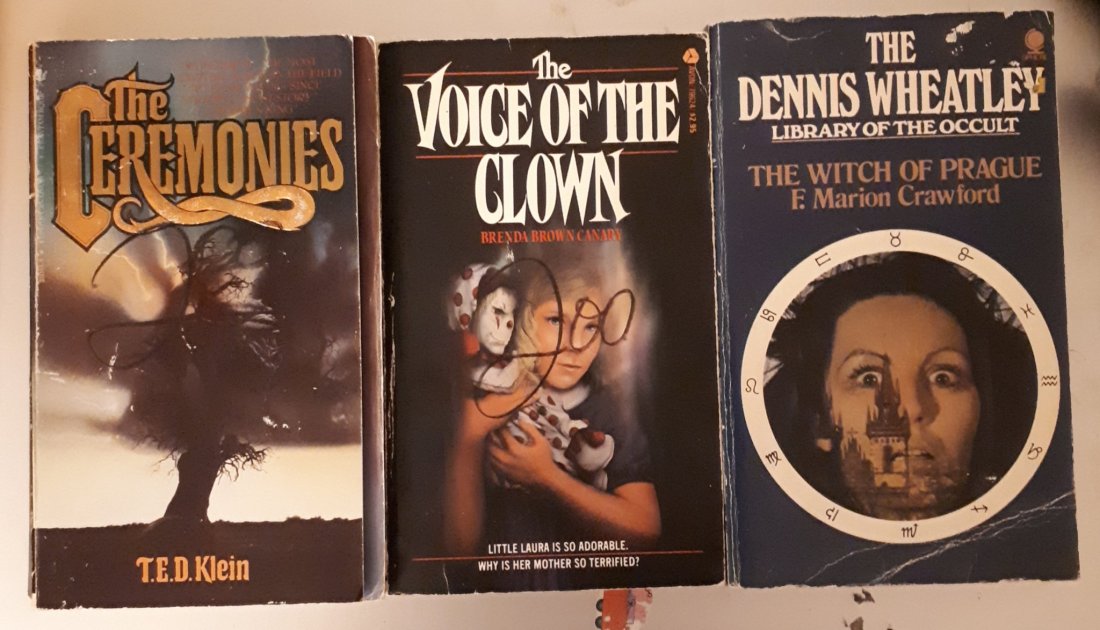 When I got home, I was elated. I tried to convey my excitement to my wife, but she didn’t seem to care. My reading list is fairly lengthy, but it was only a few weeks before I gave in to temptation and bumped this novel to the front of my list.

Then I sat down and read it.

Jesus Christ. This was an unrelenting nightmare.

T.J. unknowingly gets his girlfriend Molly pregnant and then moves away. Then he knocks up a different girl, Kate, and marries her even though he only loves Molly. After giving birth, Molly kills herself. A few years later, T.J. and Kate have another kid. Unfortunately for them, Laura, the new baby, is the reincarnation of Molly, T.J.’s old girlfriend.

Laura really, really, really hates her mom, but she doesn’t fully understand why yet. She REALLY loves her dad though, in a way that seems weird right from the beginning. When her dad gets her mom pregnant again, she becomes very unhappy.

For the most part, the reincarnation business is the only supernatural element in this book. This is not what I was expecting from the cheesy cover. The horror is not of evil spirits or of psychic powers. It is the horror of trauma, suicide, domestic abuse, and misery.

Laura is not only jealous; she is also a manipulative, sadistic psychopath. The story is also told from her point of view, a fact that makes this book all the more disturbing. The reader starts off on her side, but I started to sympathise with her mother pretty quickly. Laura does everything she can to upset Kate, a woman who may not be the best mother in the world but who hasn’t actually done anything unforgivable. I don’t want to give away details, but some of Laura’s actions were so upsetting that they caused me to put the book down and consider whether or not I actually wanted to finish it.

I’ve seen other reviews of this book where people said that The Voice of the Clown isn’t as scary as it’s made out to be and that it gets bogged down with character development, but I found the build up to be really effective. Also, I honestly doubt that those naysaying reviewers have kids of their own. I have a little girl, and my wife and I have another kid on the way, and reading about a child’s mission to destroy her family by any means was deeply upsetting for me. I can read gore all day and won’t be bothered, but reading about a jealous child’s well thought out plans to torment a helpless baby and its mother was utterly horrendous. This novel struck a nerve.

This is a miserable, bleak, unpleasant book to read. While there are some supernatural elements, it’s really more horrible than horror. That being said, I reckon that was the point. Brenda Brown Canary must have sat down and really thought hard on to how write the most horrible book ever. I don’t think something as unpleasant as this could happen by accident. I know that Valancourt Books have tried to get in touch with her to reprint this as part of their Paperbacks from Hell reissues line, but that she has yet to respond. I wonder how she feels about this book now. Was it written during a dark time in her life that she would rather forget? I hope I’m wrong, but I find it difficult to imagine a person who loves their life writing a book like this. It’s relentlessly unpleasant, and it gets worse and worse as it goes on.

All that being said, I think it is a good book. This is a methodically written novel of terror, real, unpleasant terror. I’ve written before of times when books have obsessed me. In all other cases, the obsession reached its peak before reading the book. I would get fixated on a rare horror novel and spend hours seeking out information about it before finding/ordering a copy. Reading it would be the climax. In this case, my interest was really sparked after finishing the novel. I’ve found myself picking it up since finishing it, staring at the cover and feeling an unpleasant discomfort. Part of me wants to get rid of my copy to have it out of my house, but the masochist in me wants to keep it in case I want to punish myself again in a few years. If you can get a copy of this thing and you’re not faint of heart, pick it up and jump into the nightmare.

7 thoughts on “The Voice of the Clown – Brenda Brown Canary”