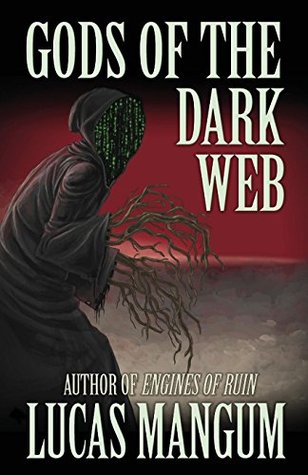 For as long as I can remember, there has been horror stories about the dark web. It’s the perfect starting point for creepypastas, and I reckon that youtube clips listing its 10 creepiest videos and the likes are where most people first hear of it. The majority of internet users, including me, don’t really understand what the dark web is or how it works, but that’s not super important here. You won’t need a degree in computer programming to understand this book. Lucas Mangum’s Gods of the Dark Web is a novel about the dangers of messing with the deepest, darkest parts of the internet.

Two teenagers start mucking about on the dark web and then very bad things happen to them. While this premise could work as a realistic thriller, the trouble in this novel seems to be caused by the union of modern technology with some eldritch ancient evil. This supernatural stuff is never fully explained, but this was a strength of the book rather than a weakness. It’s one of those ‘scarier when you don’t understand’ situations.

There are some super violent scenes in here, and while this type of novel would be a bit underwhelming if there wasn’t some brutality, there is one scene in which a baby is murdered that was tough to bear. I read this book in the same room as my 3 week old daughter, and this perhaps made it more unpleasant than it would seem to other readers, but I reckon this scene will leave most people squirming. The genre and subject matter of the book call for taboos to be broken, but, as I mentioned in my review of the Splatterpunks Anthologies, I feel like killing babies is low hanging fruit. It’s close to the bottom of the barrel of shock tactics. Then again, in the context of the story, it doesn’t seem overly ridiculous. The antagonists of this novel need to be the lowest of the low for the story to work. I won’t say that this scene or any other scene in this novel is “too much”, but I would recommend that you not read this book if you don’t feel comfortable reading about horrendous, sadistic brutality.

Gods of the Dark Web is a short novel, and I don’t want to ruin the story, so I’ll say no more about the plot. I enjoyed this one quite a bit. It’s dark, gritty and surprisingly enjoyable. Check it out if you like dark, nasty horror.

This book is only a couple of years old, and Lucas Mangum is still an active writer. He has a patreon page where he has recently published a bunch of Gods of the Darkweb extension stories featuring characters from the novel. There’s something very apt about continuing this saga in this manner. You feel like your computer might turn against you while you’re reading. Mangum is not demanding payment for what he posts on his patreon page, and I salute him for his DIY approach. I suggest you give his writing a go.

One thought on “Gods of the Dark Web – Lucas Mangum”