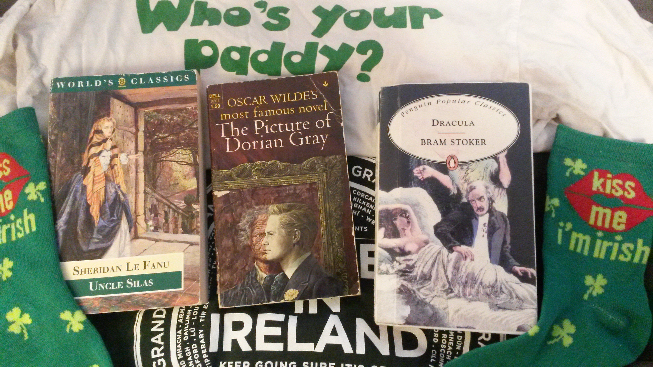 Well it’s Saint Patrick’s day on Tuesday, and what better way to celebrate Irishness than to review some classic Gothic Literature from the Emerald Isle. I won’t go into too much detail as all three of these novels are absolute classics, and I expect anyone who is following this blog to have read them all.

This novel is great. It’s been a long time since I read it though. Either way, I won’t hear a word said against our Oscar. It’s a pity he didn’t write more novels. 7.5/10

This is one of my favourite books of all time. It’s standard Gothic fare really; a young girl loses her parent and she has to go live in creepy uncle’s house. The chapter in which Maud, the protagonist, encounters her repulsive governess for the first time had me shitting in my britches. The way that creepy bitch comes down the hill is absolutely CHILLING.

My edition of the novel is nicely annotated, and there is one note that I found particularly amusing. “414 a clumsy old press: in Ireland and Scotland, press = cupboard” Visiting my in-laws would be so much easier if I could get that printed on a t-shirt.

Anyways, this book is magnificent. If you like Jane Eyre or The Mysteries of Udolpho, then this is the book for you. If that doesn’t sound like your thing, then sorry, but we can’t be friends.

Well, this is obviously one of the greatest novels ever written. This was also one of the first books that I read after graduating from university. I had just spent four years reading books that had been selected by other people, and to have the freedom to choose a book according to my own tastes was tremendous. I remember actually looking forward to going to bed at night, just so I could get stuck into this absolute masterpiece.

I’ve always had an interest in ghosts and monsters: I grew up watching Ghostbusters and reading Goosebumps, and I’ve always preferred horror films to any other genre. I was expecting to enjoy this book, but I was not expecting to be frightened. Well, I was; there are parts of this book that are damned scary. There’s nothing in here that I hadn’t seen in a hundred movies; but reading Dracula, I realized that all of those movies had used this book as a template to produce their scares. I was spooked good and proper when the lads start to go missing on the boat as the count is lurking in the shadows. Pure deadly.

There’s also some weird sexiness to this novel. That’s not just something that Hollywood added to make the film versions more successful. There’s a lot of heaving breasts in here. Mina and Lucy sound like absolute babes. The count is a kinky one too, check this out:
With his left hand he held both Mrs. Harker’s hands, keeping them away with her arms at full tension; his right hand gripped her by the back of the neck, forcing her face down on his bosom. Her white nightdress was smeared with blood, and a thin stream trickled down the man’s bare breast which was shown by his torn-open dress. The attitude of the two had a terrible resemblance to a child forcing a kitten’s nose into a saucer of milk to compel it to drink.
Dracula! She’s a married woman, ye dirty bowsy!!! And you’d think he’d be satisfied with those lovely vampire wenches he keeps in his castle. I’ll tell ye now, if I was a single man I’d have no bleedin’ bother lettin’ them have a little suck, wha?

Anyways, I’ll give this a perfect 10/10. If you haven’t read this book, you have no reason to be wasting your time reading this blog.

There are other fantastic works of Gothic fiction to have emerged from Ireland. Charles Maturin’s Melmoth the Wanderer might seem like a glaring omission from this post, but I have a plan to review that later on in conjunction with another book. I’m also planning to review more of Le Fanu’s works in the near future.

I think it’s rather interesting to note that all three of the authors reviewed in this post were Dublin protestants. (Maturin, who was incidentally Oscar Wilde’s great-uncle, was also a Church of Ireland clergyman.) These three books were also written within 50 years of each other. You’d wonder what the Church of Ireland were putting in their non-transubstantial eucharist to get their congregation to be such creeps. I’ve read that Dracula represents Stoker’s alienation from the largely Catholic Ireland, but I reckon it was just dodgy proddy communion wafers.

These books are all savage. Fuck going to the parade this St. Patrick’s day; read one of these smashers instead.

2 thoughts on “The Irish Gothic – Uncle Silas, The Picture of Dorian Gray and Dracula”