I picked this one up as part of a collection a few weeks ago. I’m not really interested in ghosts, and I’m pretty sure this is a kids’ book, but its size and short chapters made this a perfect book for some potty-reading.

So this is a collection of accounts of different ghosts and hauntings, from the ghost of Abraham Lincoln to the Flying Dutchman. It’s written in the style of writing that 12 year olds are taught to use; every paragraph in here has an introductory sentence and a concluding sentence that rephrases the introductory sentence (Teachers call this the sandwich or hamburger paragraph.). What follows is an actual paragraph from the book:

The local people were very happy. They gave Dickie all the credit. They said he didn’t want noisy trains so close to his home. So he used his supernatural powers to stop them. Dickie is a great favourite.

Come on Daniel! You’re an author; please try to use some complex or compound sentences!

While it doesn’t contain the most eloquent writing in the world, it does contain some cool stories ( And I mean, the writing is bad, but it’s not Gothic Ghosts bad.). I like the chapter on Sarah Winchester, the millionaire’s mad widow who designed a mansion to house ghosts. There’s also the tale of the Baychimo, a ghost ship from Vancouver. I’ll definitely be doing a little more research on that one. The section I found most interesting though, was the chapter on the Screaming Skulls. These cacophonic crania are alledged to shriek whenever they are moved from their particular resting spots in certain  English mansions. I looked the skulls up, and I found the following on their wikipedia page: 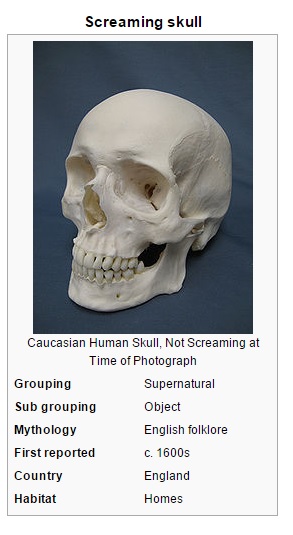 Whoever captioned that is a genius.

Like I said, I’m not hugely interested in ghosts, and I can’t say I believe in them, but three days ago, I spent about half an hour in the certainty that my home had been invaded by a poltergeist. My wife and I were sitting down, watching tv when our couch was lifted half a foot off the ground and instantly dropped back down. We don’t have any room-mates or pets, and nothing else in the room had moved. Neither of us had stirred, and our couch is right up against the wall, so we were able to deduce that whatever had done this wasn’t visible.  It wasn’t just a little bump either; this is a heavy couch, and it would take something very powerful to move it with the two of us sitting on it. Now I’ve spent the last two weeks reading books about ghosts and monsters, and so I immediately assumed that we were under some kind of infernal assault. I thought that I had perhaps awoken an evil spirit through my perusal of forbidden texts. I couldn’t sit back on that couch again without a weapon in my hand, and so I took down my trusty bullwhip from its mount and prepared to give 50 lashes to any intrusive ghoul! On seeing that I was ready for business, the spectre took his leave, and we were free to watch tv in relative peace. A while later, my wife checked facebook and saw that there had actually been an earthquake. I had never experienced an earthquake before, and so the thought hadn’t really crossed my mind. It was pretty funny to see how easily my scepticism was shaken in just a few moments of uncertainty.

Anyways, this book is alright. I wouldn’t recommend that you run out and buy a copy, but if you’re stuck on the crapper with nothing else, this will do trick. First you can use the ghastly tales to entertain your mind, and then you can use the nice soft pages to wipe your shitty rim.

One thought on “The World’s Most Famous Ghosts – Daniel Cohen”