Some of the books I have read about aliens approached the topic from a rational, scientific point of view. Others looked at this phenomenon through a less critical lens. I preferred reviewing the latter because I had more to make fun of. It’s harder to argue with a person when they’re using evidence and mathematics to make their point than it is when the author’s information comes from an alien that intermittently possesses their body and claims to be Jesus Christ.

Having studied both sides of the debate, that of the scientists and that of the new-age gurus, I needed another perspective. Where better to look than my old friend, Bob Larson?

Bob, as you should well know, is an Evangelical exorcist who has made his living preaching about the evils of rock music and extorting money from the vulnerable. Well guess what folks! In 1997, he made a breakthrough. The Devil isn’t only to be found on MTV; he’s also been riding around Earth in a flying saucer for the last 70 years! That’s right. Aliens, much like everything else that Bob Larson doesn’t like, are the Devil!

This book was quite a strange read in comparison to the other books I’ve read about aliens. If you imagine the skeptical, rational books about aliens to be a psychiatrist, the nutty new age books will appear as the patient, struggling to come to terms with what they’ve witnessed. If we carry this metaphor one step further, Bob Larson will appear as an escaped lunatic who has rushed into the psychiatrist’s office and is attempting to make both psychiatrist and patient smell his magical brown finger.

Larson uses science to dismiss some of the claims of abductees and believers, but he’s quick to dismiss science based facts as ridiculous when they don’t fit into his own worldview. At the same time, he’s completely willing to accept some of the crazier claims of the alien channelers because the Bible accepts spiritual possession as objectively real. Instead of coming down on one side of the argument, he forms his own, completely ridiculous, conclusion.

Ever since the late 1940s, the Devil has been using mainstream media to familiarize the world with the concept of a non-hostile alien invasion of Earth. The beings we refer to as aliens are objectively real, but they are actually evil spirits from another dimension, not visitors from a different planet. The Bible doesn’t mention life on other planets, so we can safely assume that all notions of extraterrestrial life are misleading and Satanic. Aliens are really just demons in spacesuits. After the rapture, when the physical bodies of all good Christians ascend to heaven without trace, the evil “aliens” will land and take over the world. The remaining humans will welcome their new Satanic overlords. With no Christians around to realise what’s really happening, these demonic aliens will lead the remaining population of the Earth into a new age of Occultism and sin. This will allow the Antichrist, doubtlessly another alien, to assume control and bring about the end of the world.

You probably got about halfway through that last paragraph before rolling your eyes and skipping to this bit. No. Go back and read it. Let it soak in.

I mean, I think that’s a fucking cool idea, but let’s be honest; there’s a few plot holes. Also, was the plan to saturate mass media with stories about aliens orchestrated by a group of Satanists or did it happen by chance? Satan works in mysterious ways.

My favourite part of the book was when Larson described his meeting with Whitley Strieber on the set of the Oprah Winfrey show. Strieber is a frustratingly gullible new-age conspiracist and alien abductee. A large portion of the last review I wrote of one of his books was spent comparing reading the book to drowning in a river of diarrhea. Strieber is a very stupid man. Imagine my surprise on reading about an exchange in which he comes across as the voice of reason. Imagine my delight on reading Larson’s conclusion that Strieber was guilty of being a witch. This is wonderfully silly stuff.

So crop circles were originally human pranks, but then the Devil saw them and thought they were cool, so he did them too.

There were moments when the depth of Larson’s research surprised me a little, but always more surprising were his bizarre conclusions. Ol’ Bob is a crazy, dangerous man who makes money from exploiting people’s fears. A vile human being. 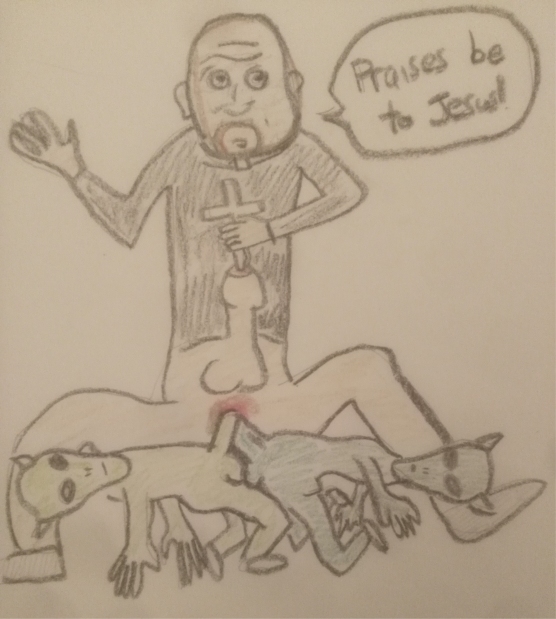