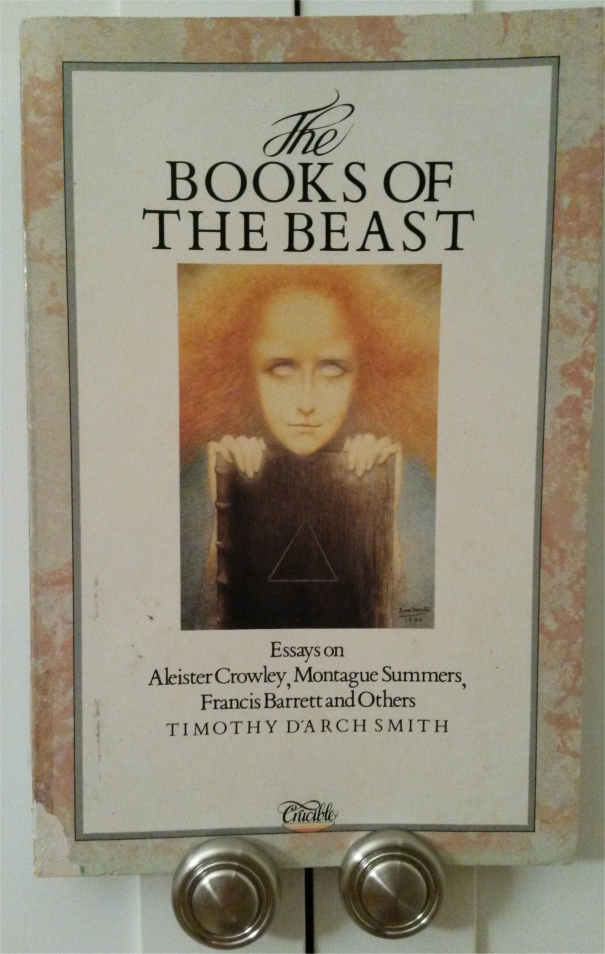 Crucible – 1987
This book popped up in my suggestions from Goodreads a few years ago, but it wasn’t until I came across a quote from it that claimed that Montague Summers had attended Black Masses that I decided to buy it.

It’s a rather interesting collection of essays about different books, their authors and their publishers. The first and longest essay is about Aleister Crowley and his predilections for certain colour combinations and kinds of paper. That might sound a little boring, but I assure you it’s a very entertaining read. Not only is it quite funny at times, it is also astoundingly well researched and documented.

Timothy D’Arch Smith didn’t know Aleister Crowley or Montague Summers personally, but he did know people that knew them. He was also a dealer of rare books for a very long time, and it is rather apparent that he’s an expert in the field. (He’s still alive; I don’t know if he’s still working.) The level of detail in here is genuinely exciting, not only because the subject matter is interesting but also because the author has apparently been able to devote his life to tracking down and examining and reading rare books about magic and sex. DEADLY.

Yes, that’s right; not all of the essays in here are about magic. One is about the collection of dirty books in the British Library and another is about Ralph Chubb, a gay paedophile. It turns out that T.D.S. is also an expert on the Uranian (bent ref) poets. Apparently there was a bunch of poets in the early 1900s who had had enough of keeping their desire to bum youngfellas to themselves. Ralph Chubb was really into it. Smith’s essay is very interesting, and I wanted to read some of Chubb’s poems to see what he was talking about, but I felt a bit wary looking them up on Google.

It is suggested herein (and elsewhere) that Montague Summers, a name my readers should be familiar with at this stage, might well have indulged in a few Uranian fantasies himself. This book also suggests that he attended Black Masses. Monty you scoundrel! In his own books, Summers violently condemns such activities, but it is here suggested that he was a practicing occultist in his youth. Smith believes that Summers was sincere in his admonitions against the Black Arts, but I’m halfway through Vampires and Vampirism at the moment, and I’m really finding it tough to believe that Summers was as credulous as he makes himself out to be. Then again, maybe he witnessed something genuinely diabolical at a Black Mass and set out to warn the world of the dangers of the powers of Hell. (Smith also wrote an entire book on Summers that I hope some day to obtain.)

There’s some other bits and pieces in here too. There’s an essay on Florence Farr (a member of the Golden Dawn who shagged both Yeats and Shaw) and an autobiographical piece. Both are interesting and worth the read. There is also a short essay on Francis Barrett, author of The Magus, an influential book of magic; however, from what I have seen online, modern editions of Smith’s book have replaced this essay with another chapter on Crowley. This seems a pity as I really enjoyed the piece on Barrett. (If anyone reading this review has a copy of the newer edition, I would be happy to scan the section on Barrett in return for a scan on the newer part on Crowley. Leave a comment or email me.)

The cover of my edition is super lame, and the page numbers on the contents page are wrong (I don’t know if it’s a numerological joke or a mistake), but all in all, this book was great; it’s short, funny and insightful. I read it in a day, but I feel that I’ll probably consult it again. Timothy D’Arch Smith seems like a real cool guy.