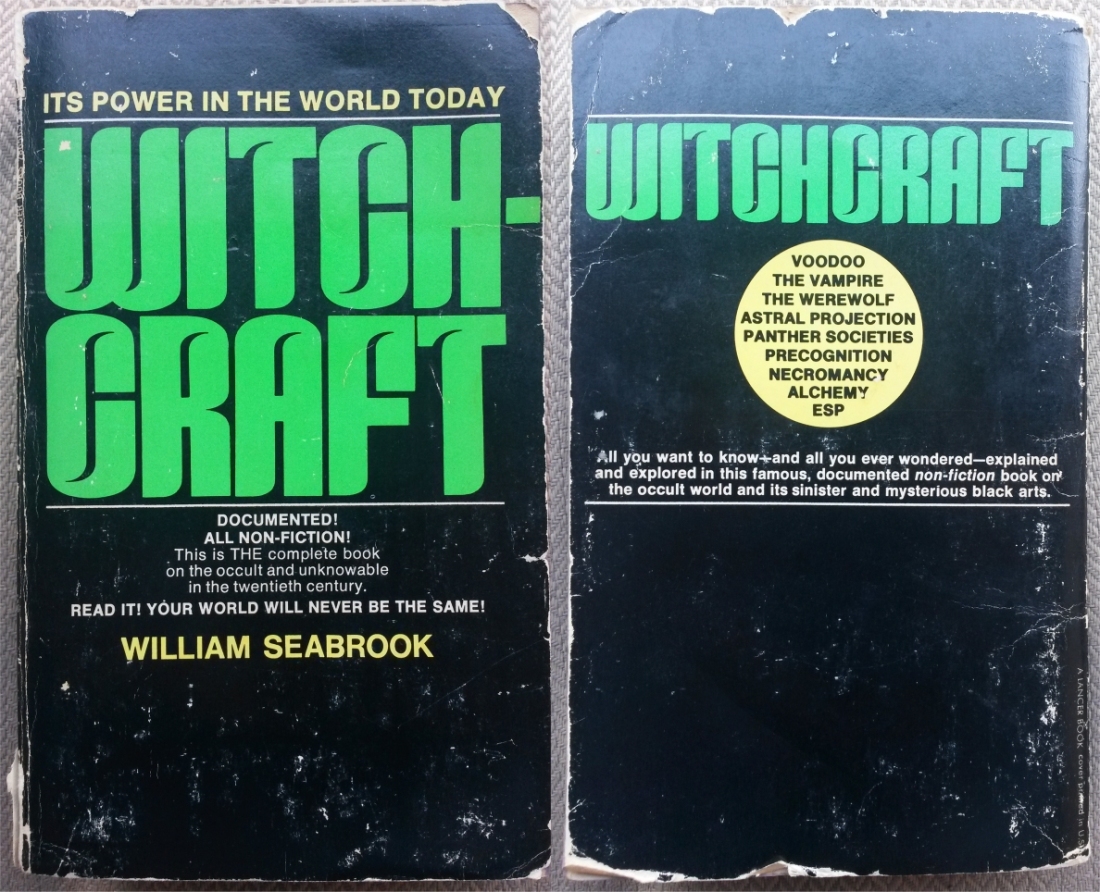 Willie Seabrook was an explorer, cannibal, black magician, bondage freak and journalist. This is his book on Witchcraft, and it’s fucking wonderful. The book deals with Seabrook’s personal experiences with witchcraft, and while a lot of it is fairly unbelievable, it is deadly craic. It’s a bit like reading a Dennis Wheatley novel told in the first person. I put this on my to-buy list after reading about it in Cavendish’s Black Arts, but after seeing it referred to in my favourite section of the Illuminatus! trilogy, I knew I had to get my hands on it. The  Illuminatus authors have Seabrook playing a part in a conspiracy involving Ambrose Bierce, Arthur Machen, Aleister Crowley, Robert W. Chambers, J.K. Huysmans, and H.P. Lovecraft. (Expect a post on Bierce soon; I reckon I’ll get around to Chambers before Christmas.) It is implied that the Illuminati murdered Seabrook over what he published in this book and made his death look like a suicide. 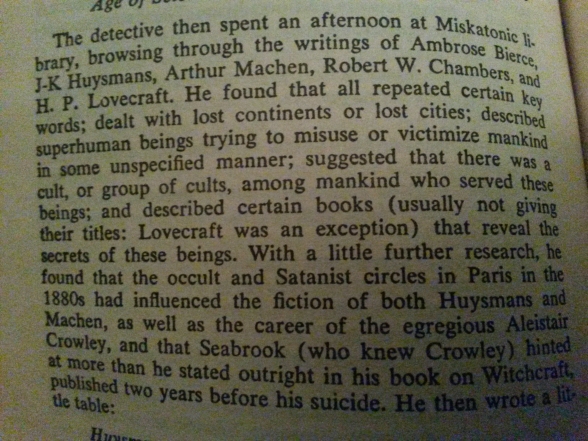 (p. 296, Illuminatus! Trilogy)
After reading this, I had to own a copy of Seabrook’s book. It’s not super rare, but it took me a while to track down a copy for what I considered a reasonable price. My edition has a fairly boring cover, but the edges are coloured an interesting purple.

Beyond the Mauve Zone?

So there’s three parts to the book. Each part is comprised of short accounts of different things that Seabrook witnessed. The first part is on Doll magic, and it’s probably my favourite. There’s one particular story about a deceitful white explorer in Africa that I absolutely loved. A lad cheats a tribe out of money and soon thereafter goes missing. Seabrook was mates with the lads in the tribe, and one day, one of the boys asks if he wants to see something interesting. Guessing that it has something to do with the disappearance, Willie warns him that if its the missing white man, he’ll be obliged to tell the police. The native laughs this off and brings Seabrook into the jungle and shows him something good. It’s the rotting corpse of another native, strung up to a tree. The ropes binding it to the branches are digging into the flesh of the corpse’s bloating neck, and things are starting to ooze. The corpse is wearing the clothes of the missing explorer, and if Seabrook was to have gotten up close, he would have seen clippings of the missing explorer’s hair stuck onto the head of the corpse.

The missing explorer was found dead a few days later after having died of a constricted windpipe. Black magic had caused what had happened to the corpse to also happen to the victim.
Fuck yes. That is the good stuff.

The second part of the book is on Werewolves and Vampires, and the third is on general occulty stuff. It tells of Seabrook’s friendship with Aleister Crowley.  This book is the origin of that famous story of Crowley walking behind a man, mimicking his gait, and consequently being able to make him collapse without touching or speaking to him. There’s also a part in here about Seabrook’s relationship with Upton Sinclair, author of Oil!, the most boring book I have ever read.

The book ends with a few chapters about kinky psychic-bondage experiments that Seabrook performed with his lover. He had a special gimp mask made for his partners that was basically designed to maximise sensory deprivation. He’d make his girlfriend Justine wear this mask, then tie her up by the wrists until she started hallucinating. They hoped these hallucinations would tell the future. The following images are not from the book, but they are extremely relevant. (They’re from an article about Seabrook from a 1942 edition of Click Magazine.)

One of Willie’s babes. Looks like he knew how to pick them.

He was a man that knew what he liked, God bless him.

Overall, this book is delicious. The stories might seem unbelievable, but that hardly matters. They’re entertaining. Plus, the author maintains that he doesn’t believe in magic the whole way through the book, and his incredulity is charming. Seabrook comes across as  a remarkably interesting, and I am definitely going to keep my eye out for his other books. There were a few times in this one when he would write something quite rude, and it would take me a while to figure out if he was being bold or not. At one stage, I believe he refers to a woman’s vagina as a pickle-jar, but maybe he meant something completely different.  Like other similar books, this contains references to other texts that I am going to have to try to get my hands on. Unfortunately, some of the books mentioned herein are fairly rare, and any copies I can find are extremely expensive. Oh well, I guess I’ll have to wait till I’m rich. Until then, I’ll leave you with some awesome pictures that I found after hunting down a reference from this book. On page 20, Seabrook mentions an article from a 1939 edition of Life magazine about Ozark superstitions. Finding the full thing online really made me happy that we live in the internet era. (Full article here)

This is why I do this blog. DEADLY!